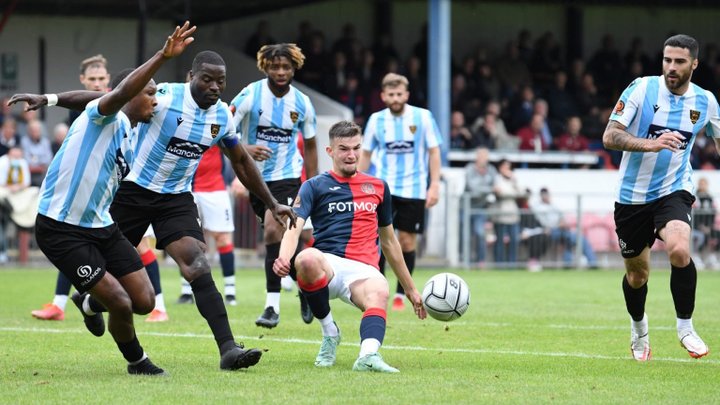 Maidstone United head coach Hakan Hayrettin doesn’t want anyone to judge his team until the middle of October.

But he says his side are so more together than before - and that gives them a fighting chance of success.

Hayrettin cut a frustrated figure after Hampton & Richmond bit back to snatch a point after they stormed ahead with 15 minutes to go on Bank Holiday Monday.

His team were the better side but their perfect start is over.

But he explained why it is still a little early to know if his squad are well placed to put in a genuine challenge.

The Gallagher Stadium boss said: “A month ago if someone would have told me we would have been unbeaten in four I would take that.

"We have a really good unity. In terms of personality and character, we’re so much better.

“I decided to make some changes in the summer. I brought players in who I have a lot of respect for and so far, so good. We’ve got a healthy squad and we’re in a good place

“We’ve got to keep our heads down and I think we’ll do OK this season. We’re training three days a week, as a manager you want to give yourself the best chance.

“We’ll know after eight or nine games what’s possible. We’ve got more personality than we had last year and the we’ve got a really good spirit.

“Sometimes a real togetherness can get you a certain amount of points and I’m pleased with what I’ve seen so far.”

He would have been even happier if Maidstone went into Saturday’s match at in-form Oxford City with four straight wins.

“If you to a goal up and you have dominated then you’re disappointed if you don’t take the points home.

What Happened On Monday In The National League?  The second instalment of the Bank Holiday weekend double had plenty of twists and turns as the crowds came out up and down the country.