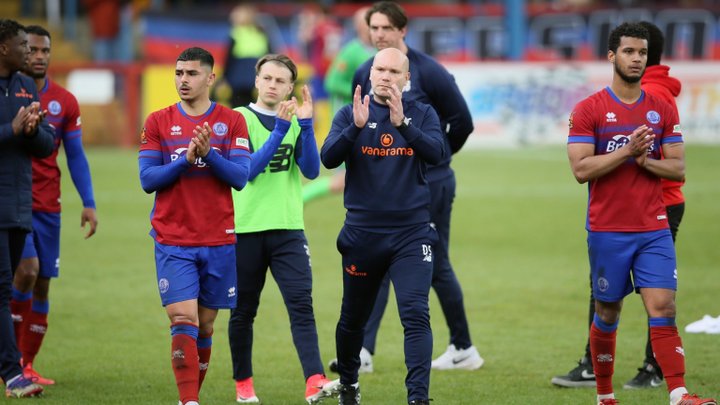 Aldershot Town have confirmed the departure of manager Danny Searle this morning.

The announcement comes with the Shots sitting 21st in the Vanarama National League, with one victory from the opening seven matches.

The former Braintree Town boss took over at the EBB Stadium in May 2019, guiding the side to 15th and 18th-place finishes in his two completed seasons at the club.

On Searle's exit, Chairman Shahid Azeem said: “Aldershot Town Football Club would like to place on record our sincere thanks to Danny for the work he has done during his time with the club and we all wish him well for the future.

“This has been a very difficult decision for the board to make, particularly with Danny taking over at the club in challenging times from the beginning, as we were unsure what league we would be in back in 2019-20 and also the Covid-19 pandemic affecting the 2020-21 season too, which didn’t see us start the season until October 2020 without any supporters in the grounds too.

“This season has also seen us face a difficult start, but despite this Danny has given his all during these tough times and we are extremely thankful for his efforts.

“Both Danny and his family have played a pivotal part during their time involved with the club and we move on with the feeling, they will continue to remain friends with the club.

"We are sure it will not be too long before he finds his next role and we would once again like to wish Danny all the best in wherever the future takes him.”

Mark Molesley has taken over the reins as the club's new First-Team Manager.

“I’m delighted to be back at a club that is very close to my heart," said Molesley following his appointment.

“My dream came true when I became a professional footballer at this club and I would be lying if I never thought of going back to the club as a manager.

“I just think any success I have ever been involved in has been built around great people and speaking to the Chairman and seeing some familiar faces, I know that there’s good people at this football club who want the same things I do".

What Happened On Saturday Across The National League?  The table is taking shape and we have new leaders in the Vanarama National League for the first time since Matchday Two.