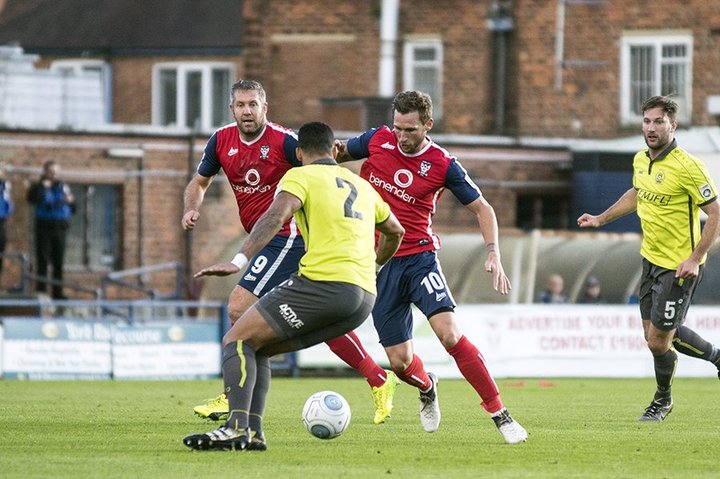 Salford City moved four points clear at the top of the table on Saturday after an amazing finale at the Peninsula Stadium saw them secure the three points with a very late winner against mid-table Alfreton Town.

Despite there being plenty of chances for Salford, especially in the first half, a hard-fought match looked like ending goalless in front of a crowd of 2,074.

However, in the 3rd minute of stoppage time at the end of the game, Salford won it when sub Manny Dieseruvwe scored from a corner.

Brackley Town are third after showing Tommy Wright what a tough test he has on his hands at Darlington FC by winning 3-0 at Blackwell Meadows.

Andy Brown gave the Northamptonshire visitors an 18th minute lead with a header from an Adam Walker cross.

It was 2-0 with 3 minutes of the first half remaining when Shane Byrne ran through, drew Quakers `keeper Adam Bartlett and set up Aaron Williams to tap in.

And the Saints completed a good away performance 10 minutes from time when |Ellis Myles netted a third with a low shot.

Spennymoor Town moved into fourth after they won at Nuneaton Town and north-east neighbours Blyth Spartans were beaten at Bradford Park Avenue.
Moors won 1-0 at Liberty Way, thanks to a late 83rd minute Glen Taylor goal from close range.

Blyth were comprehensively beaten 4-1 by Park Avenue at the Horsfall Stadium.

It took only 3 minutes for Wayne Brooksby to open the scoring for the home side.

Oli Johnson then profited from some poor defending to double Avenue`e lead on the stroke of half-time.

More defensive mistakes cost Blyth 7 minutes after the break, with Jamie Spencer adding a third for the hosts.

And Adam Boyes put Avenue 4-0 up with 66 minutes gone on the clock.

Robbie Dale then converted a free-kick in the 70th minute, but it proved to be nothing but a consolation for Spartans.

York City are sixth after they overcame Curzon Ashton 2-1 at Bootham Crescent.

Danny Parslow then added a second on 33 minutes.

Joe Guest `won` the second half for the Nash with a 57th minute reply, but the home side held firm for three crucial points.

Stockport County moved into eighth place and to within a point of the top seven after beating struggling and managerless neighbours FC United of Manchester 4-1 at Edgeley Park.

In front of a tremendous crowd of 4,072, it took only 6 minutes for Matty Warburton to put the home side in front.

And just 4 minutes later, the Hatters were two-up through Jason Oswell.

New loan signing Kallum Mantack made it 3-0 with 3 minutes of the first half remaining.

And although Jason Gilchrist reduced the deficit 10 minutes into the second half, a foul by Matty Hughes on Oswell saw Warburton add his second and County`s fourth from the penalty spot on the hour-mark.

Kevin Davies` Southport side were held by bottom-markers North Ferriby United at the Merseyrail Community Stadium – only the Villagers` seventh point of the season to date.

Steven Schumacher pulled Southport level after 39 minutes with a low first-time effort after Dom Smith's cross had been only partially cleared.

But North Ferriby equalised on the hour-mark when Ross Burrows saw a shot saved from Darnelle Bailey-King's cross, allowing Kuda Muskwe to pounce on the loose ball.

Boston ripped the form book as the team without a win in seven league games beat a side who were unbeaten in as many.

Boston moved up a place to third-bottom and above FC United following this win.

Son of Brendan Rodgers Joins The Crusaders!  Ian Herring and Jon Boardman, joint-managers of Hungerford Town, have pulled off something of a coup signing by adding attacking midfielder Anton Rodgers to their squad.