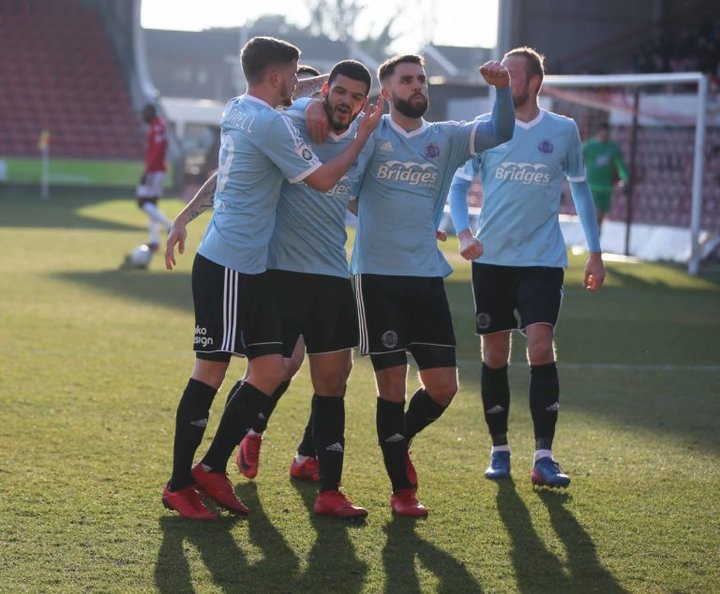 Macclesfield Town maintained their five-point lead at the top of the table on Saturday after a hard-fought, late 1-0 win at Moss Rose against a determined Maidenhead United side.

It was a fairly even first 45 minutes, with the Silkmen`s Danny Whitaker coming closest to breaking the deadlock.

As the game wore on, it looked more and more like Alan Devonshire`s side would take a decent point away with them.

But a late flurry saw Whitaker almost give the home side the lead with a stunning drive from the edge of the box.

And then almost a wonder goal from Elliott Durrell followed.

In the first minute of time added on at the end of the game, Macclesfield finally broke through when Scott Wilson`s header at the far post beat Lloyd Pentney.

Sutton United remain in second spot after a comfortable 4-0 win against bottom side Guiseley AFC at Gander Green Lane.

The only goal of the first half arrived after 35 minutes when a long throw from Kieron Cadogan nearly caused an own goal off Ash Palmer, but Terrell Thomas fired home the rebound.

Six minutes after the restart, the U`s doubled their advantage when confusion in the Guiseley box finally ended up in Byron Harrison turning the ball home.

The points were made safe after 57 minutes when a good run from Tom Bolarinwa ended with a square ball for Craig Eastmond to tap-in number three.

And it was 4-0 on 76 minutes when a Harry Beautyman corner went in off the far-post and keeper Luke Coddington.

Tranmere Rovers are now third after they increased Maidstone United`s relegation worries with a 3-2 win at the Gallagher Stadium.

But with just 5 minutes to go, the Stones were leading and looking comfortable. But then two goals inside 3 minutes turned this match around leaving Maidstone on the end of a third consecutive defeat.

Alex Finney had an `interesting` day as he gave The Stones a 29th minute lead, scored an own goal and conceded a penalty.

Andy Cook equalised for Tranmere after 39 minutes, only for Ross Lafayette to restore the home side`s lead 3 minutes before the break.

Finney`s afternoon unravelled in the 86th minute when he put through his own net and moments later he gave away the spot-kick converted by Adam Buxton as Rovers clinched a crucial victory.

Tranmere leap-frogged Aldershot Town who were held to a 2-2 draw by sixth-placed Wrexham at the Racecourse Ground.

Despite falling behind to a 21st minute Scott Quigley effort after a mistake by `keeper Jake Cole, the Shots dominated possession, and could easily have more than Shamir Fenelon’s 43rd minute header to show for their efforts at the break.

But they fell behind again after 57 minutes with a second from Quigley, neatly finished after good work by Chris Holroyd.

A glancing header from Callum Reynolds 15 minutes from time rescued a point for the visitors.

Boreham Wood are fifth but were held to a 0-0 draw at Kingfield by mid-table Woking.

AFC Fylde complete the play-off picture after they beat Dover Athletic 3-1 at Mill Farm and overtook them in the table.

After a first half of few chances, it was the visitors who broke the deadlock after 57 minutes when Ade Azeez's cross from the right was tapped in at the back post by Mitchell Pinnock.

The Coasters equalised after 69 minutes when Lewis Montrose set up Danny Rowe 25 yards from goal and he smashed the ball into the bottom corner.

They hosts` were in front 8 minutes later when sub Serhat Tasdemir received the ball on the edge of the box and he lashed it through `keeper Mitch Walker from 15 yards.

And the comeback win was complete in the 90th minute when Tasdemir's shot hit the post but fell kindly for Jame Hardy who rounded a defender before thumping the ball home from close range.

Ebbsfleet United are level on points with the Coasters in eighth after increasing troubled Hartlepool United`s woes at Victoria Park.

The home side were poor in the opening 45 minutes and fell behind to a 17th minute Dean Rance effort.

The hosts were better in the second half, but despite a spirited performance, Matthew Bates' men were left empty handed.

Chester FC made it back-to-back defeats this week with a 3-2 loss at Victoria Road against Dagenham & Redbridge, who had only won one in six going into this game.

The Daggers took a 12th minute lead when Matt Robinson picked out Fejiri Okenabirhie on the edge of the box and he curled a shot off the post and into the back of the net.

Chester were level on 32 minutes when a long ball forward found Jordan Archer, who volleyed past Mark Cousins.

That was it until the 63rd minute when the visitors went in front – Cousins saving Dominic Vose`s initial shot, but Matty Waters tapped in the rebound.

Then two goals in the final 4 minutes turned the game in the Daggers` favour.

Robinson flicked the ball towards Okenabirhie, who fired a shot into the bottom right hand corner.

And then another Robinson cross was put past his own keeper by Andy Halls.

FC Halifax Town earned a hard-fought point as they drew 0-0 at the Silverlake Stadium against Eastleigh in Jamie Fullarton’s first game in charge.

Ironically, the previous three games between the teams had produced 14 goals, but this hardly looked like producing one, but it represents a decent away point for the Shaymen.