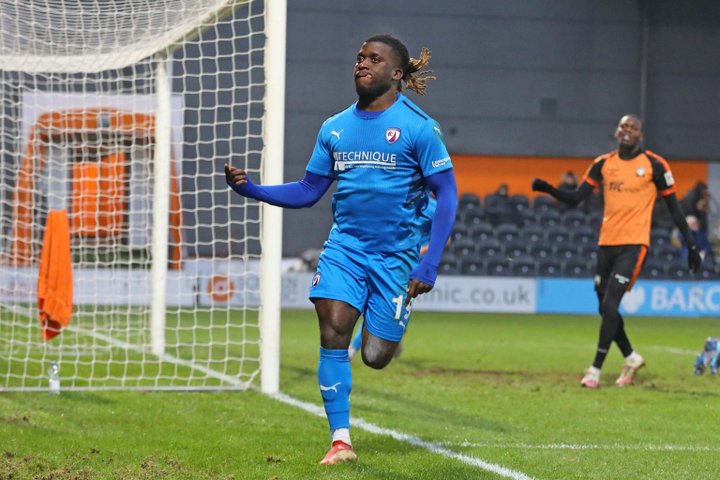 While many sides were looking for FA Trophy progress, the heat was turned up at the top of the National League.

Chesterfield are back to within a point of leaders FC Halifax Town after another super showing in front of goal.

They won 4-1 at Barnet with all the goals coming in the second half.

The league’s top scorer Kaba Tshimanga, pictured, was at the double with Akwasi Asante adding his name to the scoresheet.

A Jeff King beauty wrapped it up for the title chasers.

Dover Athletic are still winless. They were ahead at half time against Wealdstone but lost 2-1 - Ashley Charles fired home the winner.

The chasing pack all won in the National League North with leaders Brackley not in action.

AFC Fylde returned to form as they also won 2-0 at Leamington.

Marcus Dinagna got a big late winner for Kidderminster Harriers as they defeated Darlington.

JJ O’Donnell got on the scoresheet as Blyth Spartans won 2-0 against Gloucester City.

There are new leaders in the ever-changing National League South title race.

Dorking Wanderers took spot thanks to their comeback success at Hampton & RB. Wes Fogden’s winner was enough to send them top of the pile.

Billericay Town are off the bottom as they damaged Oxford City’s title bid with a 2-1 win. Femi Akinwande got the winning goal.

There were surprises in the FA Trophy this afternoon

Bromley defeated Aldershot while National League strugglers Weymouth had no joy at Dartford.

The Four FA Trophy Ties To Watch Out For This Weekend  Much of the Vanarama National League takes a break from league action this weekend as the FA Trophy makes its first appearance of 2022, writes Josh Goodman.