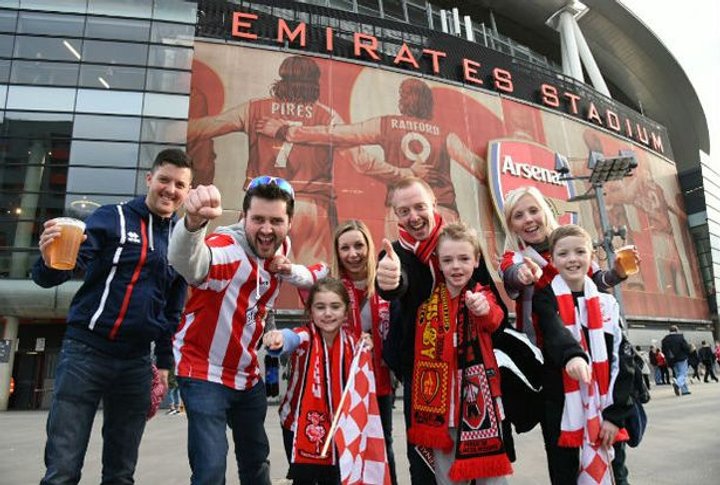 With the New Year nearly upon us, we’ve taken some time out to look back as well as look forward.

It was a great 2017 with a lot of wonderful moments to remember, and after all the excitement you can only sit back and wonder what 2018 has in store for us.

We’ve tasked our team of writers to pick their favourite memories and look forward to what’s around the corner.

Highlight of 2017: Covering Sutton United and Lincoln City in The Emirates FA Cup. The famous Impvasion at Arsenal was a particular stand out.

Player of 2017: There are three things guaranteed in life: death, taxes and goals from AFC Fylde’s Danny Rowe! The striker has taken the step up to the Vanarama National League in his stride, having broken the goalscoring record in the North division during the previous campaign.

Goal of 2017: I’ll pick from games I’ve attended, there were three contenders. Beating Welling United’s Joe Healey (away to Hemel Hempstead) and Christian Doidge’s goal in Forest Green Rovers’ day at Wembley was a 30-yard thunderbolt from Ellis Deeney for Tamworth against Kidderminster Harriers.

Best game attended in 2017: Tamworth 3-4 Kidderminster Harriers in March. Keith Lowe scored a late goal to seal a vital three points for John Eustace’s men in their promotion race with eventual winners AFC Fylde. This game was a fantastic advert for the competition.

Player to watch for 2018: I could spend an hour on this, so I’ll keep it brief. Tommy Wright and Jason Taylor at Sutton United, Joe Lesley at Harrogate Town and Braintree Town’s Marc Okoye.

Highlight of 2017: It has to be seeing nearly 10,000 Lincoln City fans invade Arsenal in the FA Cup quarter final. My colleagues will no doubt also say the FA Cup but it was a special history making year.

Player of 2017: Dave Tarpey. Scored the goals to get little Maidenhead United promoted, proved to everyone he’s good enough for the National League in August before getting his Football League move to Barnet in the very final seconds of the final day of the transfer window.

Goal of 2017: Jordan Parkes. His overhead kick for Hemel Hempstead at Hungerford in August was a thing of beauty. I’m not sure there will be a better one in 2018!

Best game attended in 2017: Sutton United 0-2 Arsenal in the third round of the FA Cup. It was a pleasure to observe how the club handled a fixture with the eyes of the world on them. Arsene Wenger was full of praise for them after, too.

Player to watch for 2018: There’s a few set for big things, Bruno Andrade at Boreham Wood and Sutton’s Tommy Wright have big futures but Scott Wilson at Macclesfield is maturing perfectly.

Highlight of 2017: My highlight would be the FA Cup performances of both Sutton United and Lincoln City last season. Both did the National League and Non-League football proud.

Player of 2017: My player of 2017 would be something of a surprise maybe, but Danny Whitaker of Macclesfield Town. Great consistency and has missed only four league games in 2017.

Goal of 2017: James Gray's August Bank Holiday Monday cracker for Torquay United at Woking – sadly it was only to be a consolation but what a strike it was.

Player to watch for 2018: Blair Turgott at Boreham Wood. Now that he has returned to Meadow Park on a permanent basis from Stevenage, I believe the 23-year-old former West Ham academy graduate will show the form that earned him a place in Jamie Vardy's V9 Academy and had him rated as good enough to represent England up to under-19 level.

Highlight of 2017: York City winning the FA Trophy at Wembley, after their heartbreak of being relegated just a few weeks before, it was nice to see the Minstermen and their fans enjoy victory against Macclesfield Town.

Player of 2017: Danny Rowe at AFC Fylde excelled last season in the National League North and has made the step up with ease, scoring plenty of important goals for the Coasters.

Goal of 2017: Matty Kosylo produced another moment of magic against Maidenhead United for FC Halifax Town beating three defenders cutting inside and then firing into the bottom corner.

Best game attended in 2017: Lincoln City 2 Macclesfield Town 1, a special match that saw the Imps gain promotion, the singing of Sweet Caroline before and trophy presentation afterwards added to the match.

Player to watch for 2018: Alex Purver is highly rated at Guiseley and now back to full fitness, people will see why that is the case. He has excelled in recent matches and will continue to do so.

Highlight of 2017: I think it’s hard to ignore last season’s FA Cup heroics from Lincoln City and Sutton United. The Imps, of course, won at Premier League outfit Burnley and Sutton saw off Leeds United. Both clubs were undone by Arsenal but they represented the Vanarama National League brilliantly.

Player of 2017: Danny Rowe (AFC Fylde) - Yes, the first half of his calendar year was spent in the National League North but you can't help but be extremely impressed by Rowe's goalscoring record over the past 12 months. He finished last season with a fantastic tally of 50 goals and has netted 12 times in the National League for Fylde following their promotion. He is the definition of a key player.

Goal of 2017: Joey Jones for Woking v Forest Green. Some people like intricate build-up play whilst others prefer a thunderous volley. For me, you can't beat a defender getting in on the act! Woking centre-half Jones fired in an absolute beauty from at least 35-yards - a stunner!

Best game attended in 2017: Forest Green 5-5 Torquay - The two clubs had a seven-goal thriller last Boxing Day so there was no way they were going to better it on New Year's Day, right? Wrong! Fighting at different ends of the table, the pair shared ten goals on January 1 with Rovers scoring two late goals to rescue a point. That's entertainment!

Player to watch for 2018: Macauley Bonne (Leyton Orient). Still just 22, he's bagged 13 goals in a struggling side and made his Zimbabwe international debut - Bonne could really flourish under Justin Edinburgh.

 Boss Smith Urges Bromley To Learn Their Lesson Bromley boss Neil Smith has urged his team to start learning their lessons and tighten up at the back.

Still Calls For Daggers To Find Consistency  Dag & Red boss John Still says his side have to perform during whole matches if they are to get back to winning ways this weekend.