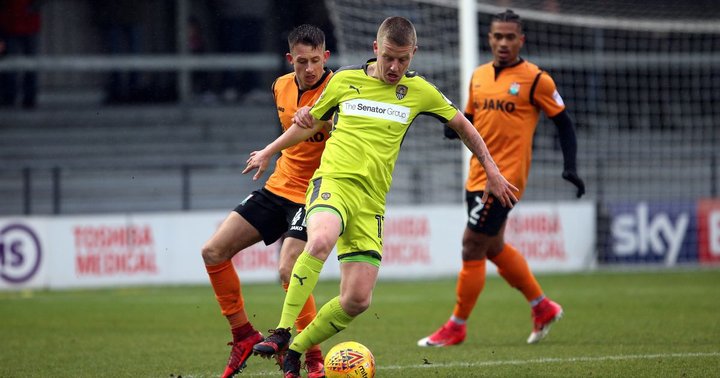 Darlington have swooped to sign midfielder Jordan Nicholson following his release by Barnet and manager Tommy Wright hopes his new man will be an instant hit.

Nicholson has experience in the National League North having previously scored 21 goals in 51 games for Nuneaton over two loan spells, before making his move to Barnet at the beginning of last season.

Quakers manager Wright told the club’s official website he wanted to sign Nicholson last year but he opted for a move to League Two with the Bees instead.

He said: “I’m delighted to get my man, he’s a player I’ve been working on since January when his loan from Peterborough to Nuneaton came to an end but at the time he favoured a move to Barnet in League Two.

“He now links up with former team mates Reece Styche, Luke Trotman, Ben O’Hanlon and Mitchell Glover so he will settle in quickly.”

Darlington finished eight points away from the play-offs last campaign and Tommy Wright will be hoping Nicholson’s goals and creativity from midfield can give his side that extra push this season.

“Jordan adds goals, he is also a creator and his work ethic matches that of the group. He will be a fans favourite with his style of play and I can’t wait to integrate him into the group. “

 The 2017-18 Season Review: Looking Back On November Missing your football already? Well you aren't alone. That's why we're taking a look back at the season month-by-month.

Pat's The Way To Do It! Oxford Sign Up Their Star Striker  Oxford City have announced today that last season’s top scorer Matt Paterson has signed on again for the coming season, writes Tom Scott.