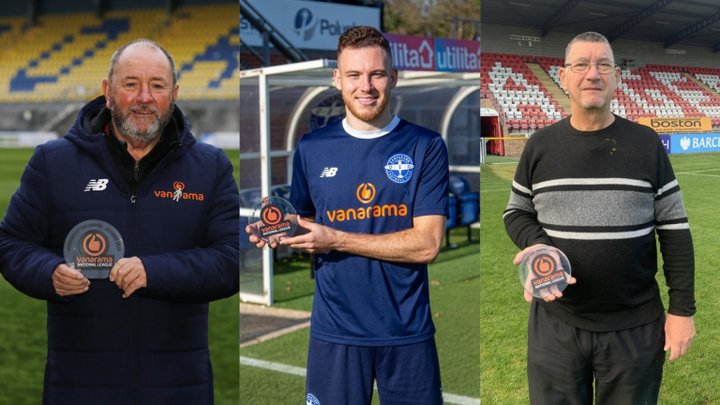 One thing never changes in these very different times and that’s the importance of rewarding those who make the difference on the pitch, off it and also on the sidelines.

The Vanarama National League awards are back and we have some very worthy winners to tell you about.

Gary Johnson started his managerial career as a wide-eyed, smartly dressed 31-year-old at Newmarket Town back in 1986.

What a boss he has become, but with next season his 35th in management he wants to be an EFL manager again to mark the milestone.

The Gulls were sensational in October, beating fancied Stockport County first, then following up an off day at Eastleigh by winning against Bromley, Chesterfield and Dover Athletic.

They saved the best until last. How about a 5-0 away win at Hartlepool United live on BT Sport to say goodbye to a great month in style?

One thing we have learned is Ben House has already made Eastleigh his home.

The talented 21-year-old is channelling the disappointment of being released by Reading into sparking the Spitfires - and what a first month the striker has had at his new club.

He started with a goal in the first day 5-1 win at Barnet, and then got both as Eastleigh stunned Torquay United. Another brace for Ben proved to be the difference at Bromley in their last National League outing.

It’s six so far, including an FA Cup goal, and his manager Ben Strevens says he’s just getting started.

As we all know, current times are a challenge for everyone - and football fans have certainly felt it as much as anyone since March.

The Volunteer of the Month has never been more important, and neither have the hard workers to our clubs.

Dagenham’s Graham Keeble stepped up during the first lockdown - and how the East Londoners needed a helping hand.

Immediately after lockdown the club requested volunteers to help prepare the stadium for the new season.

Graham, a long-time supporter and helps run the Facebook page, immediately volunteered. Since July he has attended the stadium two or three times per week to assist where he can.

When the club was chosen as a pilot game for the return of spectators in pre-season, he stepped up, coming in five days most weeks to ensure that the Daggers were ready.

He has done a fair amount of tidying rubbish, helping to clear out sheds, filling skips, litter picking and even jet washing around the ground. He has been a fantastic help in these trying times for National League clubs.

 The Draw For The FA Cup Second Round Has Been Made Our 12 FA Cup first round heroes have discovered their next opponents following tonight’s FA Cup draw.

Oxford Go Looking To Make Up The National League Numbers Tonight  Oxford City may be no strangers to this stage of the FA Cup in recent years, but tonight they could help do something rather special.