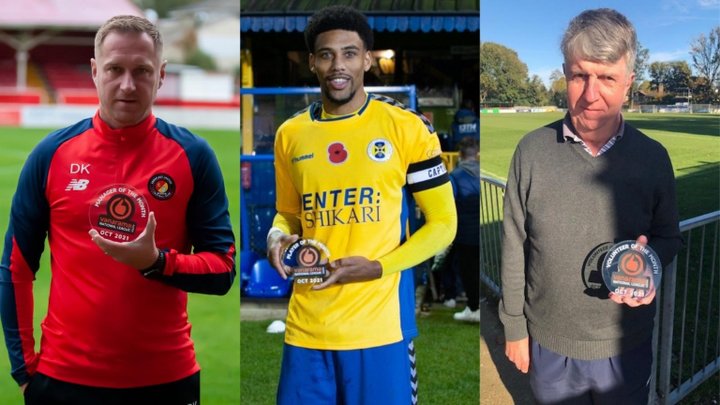 The National League South is seriously starting to take shape - so it’s high time we put some trophies in hands.

German managers making it big in English football is hardly a new thing, but one trying his luck in the sixth tier is somewhat of a novelty.

When you’ve got countrymen Jurgen Klopp and Thomas Tuchel to look up to, you could forgive a sense of invincibility.

Dennis Kutrieb is certainly starting to make a name for himself at Ebbsfleet United.

In October, his team won all five matches, including two FA Cup ties and they took nine points from nine in the National League South.

They beat Slough Town, Braintree Town and Eastbourne Borough as finally, after a few tough seasons, the club appears to be on the up once more.

St Albans City fans are thrilled to be back inside Clarence Park and they certainly had their fill of football in October.

Nine matches - including four FA Cup ties - kept their vocal chords warm as the weather starts to get colder.

The name on their lips during most of those games was star striker Shaun Jeffers.

The former Chelmsford City star scored no fewer than six times, including a hat-trick against Billericay Town.

The Player of the Month’s goals helped elevate the Saints to second spot and the FA Cup first round, where he scored the winning goal against Forest Green Rovers from two leagues above.

Every club has their behind-the-scenes heroes - and Alistair Bruce is a busy Beaver.

The Hampton & Richmond Borough fan has been working with boundless energy at the club for a number of years.

He’s chipped in with everything from laying concrete at the club to painting fences and heping cut the pitch. Every club needs fundraisers, and he’s shown his skills to help keep vital cash rolling in.

Anyone who has tried to travel across the capital at peak time will respect his commitment.

Alistair goes by bus and train from south east London to help do his bit and he now has to be at games early, acting as a volunteer steward on match days.

 National League's October Monthly Award Winners Revealed! October is usually the month when we see the cream start to rise to the top - so it’s about time we honoured those who really started stirring!