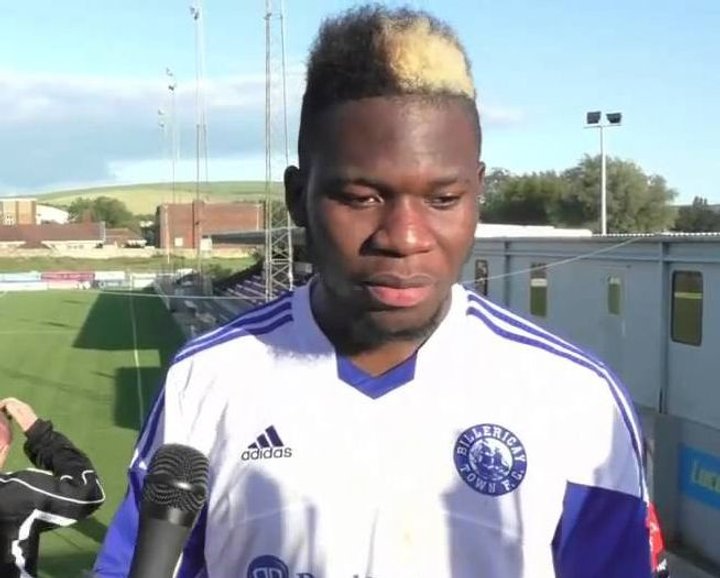 Fondop-Talom (pictured), who was previously with Whitehawk, was playing for Stanway Rovers in the Thurlow Nunn League when he caught the eye of then-Billericay Town manager Craig Edwards and, after impressing in an under-21 game at Great Wakering Rovers, he was immediately thrust into the Essex outfit's first-team.

He marked his debut with a goal in a 6-0 home win over Metropolitan Police and scored 8 times in his first six matches and finished the season with 11 goals in all competitions before controversially switching to Margate in May 2016.

However, Gate pulled out of the deal after being informed by the FA that he wasn`t a `free agent` and therefore Billericay would be entitled to compensation.

He spent part of the last pre-season on trial with SkyBet League Two side Cheltenham Town without managing to secure a contract.

He has previously played for thirteen clubs, including Rochdale, Notts County, Falkirk and Barrow AFC.

The 28-year-old was released by Macclesfield Town in May, having made two appearances for the club.

Freestone, 17, is a rising talent in the Peterborough United set-up and has four League One games to his credit.

The left-back joins Guiseley on loan after making progress through the Posh academy.

He burst onto the first-team scene in pre-season 2016, and had a number of loan spells in 2016/17 to increase his experience including spells at then-Evo-Stik League South Premier outfit Cambridge City and National League South side St Albans City.

He signed a three-year professional contract with Peterborough in July

The signings follows swiftly on from the arrival of Simon Lenighan on Saturday.

The midfielder made his Lions debut in the 3-0 defeat at Maidenhead United replacing the injured Danny Lowe in the first half.

The 23-year-old has previously played at Rotherham United after coming through the Leeds United academy.

 Weaver Wants Cup Run Along With League Campaign Harrogate Town boss Simon Weaver says his side have what it takes to both do well in the league and FA Cup.

It'll Be Different This Time Says Doswell As Sutton Take on Dover  Paul Doswell is confident his Sutton United won't suffer a thrashing at home to National League leaders Dover Athletic like they did last season!