Nerves Got The Better Of Harriers Admits Eustace 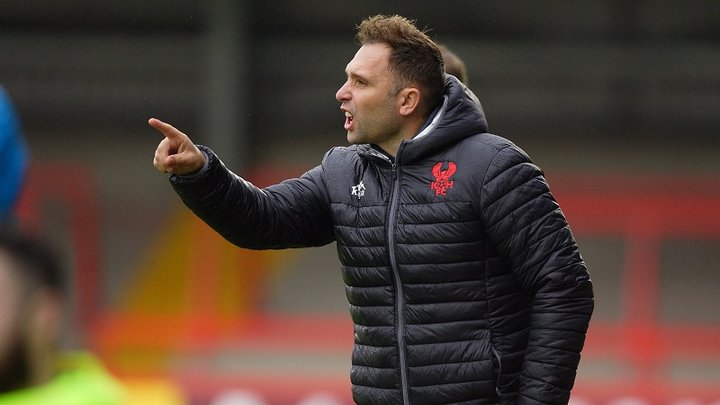 Despite dominating possession and having a number of good chances, Harriers couldn’t find their way past Bradford Park Avenue keeper Steve Drench.

Adam Boyes scored early on and Oli Johnson added a second towards the end to send Avenue through to the semi-finals at Brackley Town on Sunday.

“I’m very proud of the group and the way we play football,” he said. “I’m disappointed for the lads because they’ve put so much hard work into playing a certain way.

“In these big, big games it’s a shame that they don’t go out and fully believe in themselves. You could see there were three or four who were nervous. That’s part of having a young group but hopefully, they’ll come back stronger.

“Everyone is really disappointed, we certainly didn’t want to end the season like that. Fair play to Bradford, they came and played really well. Good luck to them, I hope they go and clinch promotion.

“We started nervously and didn’t get our passing game going. We grew into the game and had some good chances. In tight games, you need people to stand up and be clinical and we didn’t do that.”

Eustace wouldn’t be drawn on his personal future but with a good chunk of the squad already signed up for next term, he hopes Harriers will be in a good position for another promotion push.

“Hopefully the club can keep as many players here as possible and have a real go next season,” the former Watford, Stoke and Derby midfielder added.

“I know there will be lots of League clubs watching our players and some will get their moves. We won’t stand in their way - I couldn’t have asked for any more from them over the past two seasons.”

 Wilde Amongst Six Players To Leave The Shaymen FC Halifax Town have confirmed that full-back Josh Wilde has left the Vanarama National League club along with five other players.