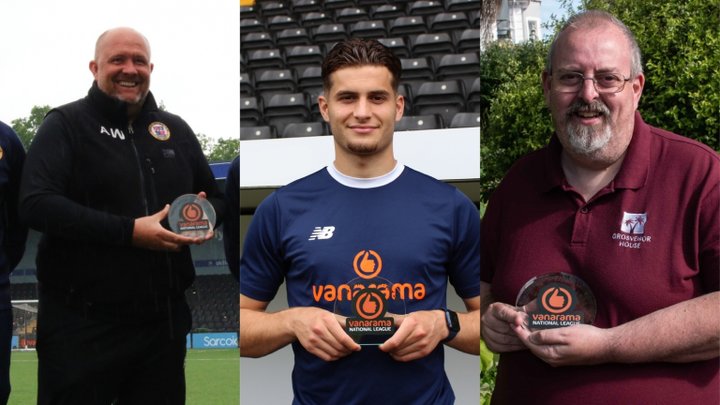 After a challenging season like no other, May was when we started to see some silverware placed in hands.

But the awards haven’t stopped being dished out as we await the start of the play-offs this weekend.

One manager who has his mind on something special in the weeks ahead is Andy Woodman.

Starting as he means to go on could pretty much be the Bromley manager’s mantra.

Since he arrived at Hayes Lane in late March, the south east London club haven’t looked back.

He certainly wasn’t expected to make the play-offs from those on the outside, but that he did after a victory-filled two months at the helm.

In May, Bromley turned the screw. Defeating Hartlepool United kept them in touch, before a great draw at back-in-form Torquay United.

They defeated Wealdstone and nicked what would be a vital point at Notts County.

A late, late win at Aldershot followed before they kept their composure to earn a top seven slot on the last day by defeating the Magpies.

That earned Woodman the Manager of the Month accolade - and now he has eyes on an even bigger prize!

Notts County fans could look back on their heroic win over leaders Sutton United as their season’s turning point.

Badly struggling for form, they went down to ten men - and struck at the death to win it, live on BT Sport four weeks ago.

Ruben da Rocha Rodrigues scored twice, notching a last-gasp penalty in the process, to lift the dark cloud. There was no stopping them after that.

He had struck a great free-kick at Altrincham days before, and then got in on the act at Barnet.

The Portuguese attacker got another at Maidenhead and then scored in the home games against Bromley and Weymouth.

Seven goals in total in May means he saw off some stern competition for the Player of the Month award.

There was only one winner of the Vanarama Volunteer of the Month, however.

Ray Duffy lives and breathes Torquay United, and without his dulcet tones many supporters would have been lost this season.

The Gulls’ match commentator has been working overtime to bring the title-chasers’ match streams to life over the past eight months.

Helping fans cope with their absence from matches, his efforts have made the separation process that bit easier.

Dedicated Duo Are May's Volunteer of the Month Winners!  It’s usually at around this time of the year when the trophies are being dished out for on-the-field achievement.