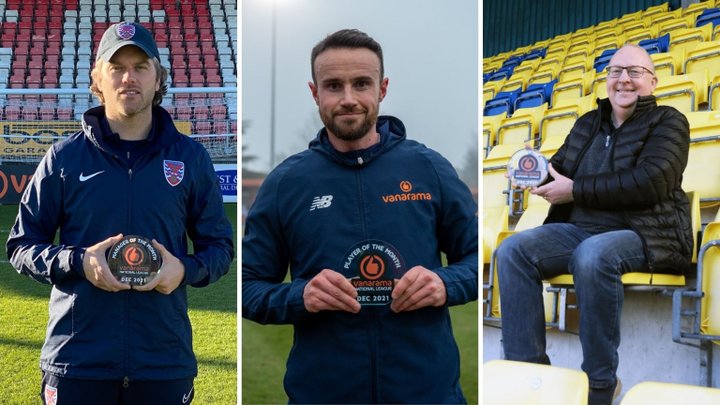 We would like you to meet December’s National League award winners as we honour the month’s deserving stand-out stars.

We’re fast reaching the time of the year when the men start to be separated from the boys.

Dagenham & Redbridge certainly slipped away after a good start but their fans feel the cream is starting to rise again in East London.

Daryl McMahon saw his team bounce back after a tough spell in November to win all three of their league games last month.

They had a 100 per cent record, progressing also in the FA Trophy after a long trip to Truro City.

In the National League they defeated Grimsby Town, Dover and Aldershot and seem back to their old selves again.

McMahon is a monthly winner for a second time after securing the August/September accolade.

Matty Warburton has had a taste of the EFL and now he wants another bite at it.

After earning a move to Northampton Town having caused waves at Stockport County, the 29-year-old FC Halifax Town man now wants to go up with a medal around his neck.

He scored three in three last month as the Shaymen surged towards the top - and the current leaders know how important he is.

Without his goals in December they would be five points worse off and would have been sitting outside the top seven heading into 2022.

Now FC Halifax fans want to know if Warburton and his team-mates have title staying power.

We love the Vanarama Volunteer of the Month, giving those who go the extra mile for their club some deserved acknowledgment.

Ric Robins is Torquay United’s go to man whenever there’s an issue at Plainmoor.

Having been a volunteer for a number of years now as the club’s stadium announcer, he has decided it shouldn’t stop there.

Because of a number of absentees late in 2021, Ric stepped into the breach on more than one occasion – fulfilling no less than three vital media roles throughout the course of December.

He sometimes balanced two tasks at a time, compiling statistics for media outlets, provided radio commentary of matches for fans as well as serving as a makeshift cameraman for a post-match interview.

One thing is for sure, when it comes to the Gulls Ric is always at the ready.

Well done to all our fantastic three winners!

 What’s Ahead On Tuesday Night Across The National League The action doesn’t stop any time soon - tonight sees plenty of clubs lace up their boots as the battle for vital points continues.