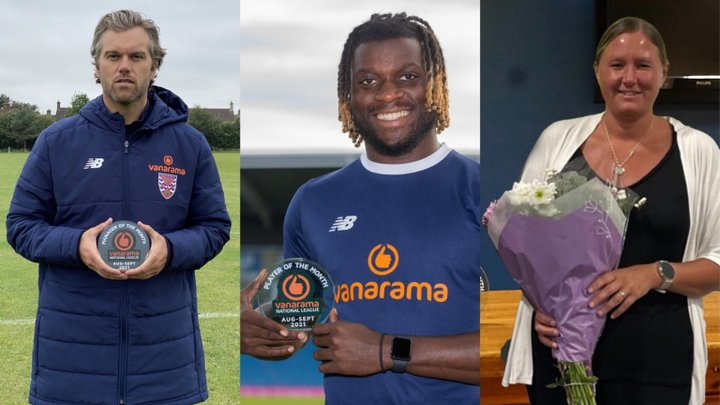 It’s been an electric start to the new National League season - and now’s the time to honour those who have set pulses racing across the country.

Daryl McMahon refused to talk his team up during the summer. He let others hog the headlines and set about quietly fine-tuning his team.

He didn’t have too much work to do. After all, the Daggers ended last season with just one defeat in ten.

They started where they left off, too. Just one defeat in the first two months left them topping the table - and his team looking like real contenders.

Six sensational wins in the first two months lit the fuse. The East Londoners and their manager built a strong foundation for the months ahead.

When a new striker arrives there is always one rule fans need to stick to - give him time and allow the forward to find his feet.

Instant expectation does little good for anyone.

Kabongo Tshimanga not only hit the ground running at Chesterfield, he gave it the full Tyson Fury treatment.

Six weeks, nine goals. There really was only one winner of the Player of the Month award.

He was the Spireites stellar summer signing and the former Boreham Wood man didn’t fancy hanging around. Chesterfield fans feel like he has only just whetted his appetite for goals.

Every club has their behind-the-scenes heroes - and Emma Goulbourne is the talk of Torquay United.

Giving up her time to the club, she works alongside former Gulls star Chris Todd and is a vital cog in their youth machine.

She works all hours for her club, solving problems and spending hours on the phone making sure things run like clockwork.

In Chris’ words, she literally does anything and everything – and just for the love of the club.

 What Happened Across The National League On Tuesday? There was a game in each division tonight ahead of a huge FA Cup weekend.