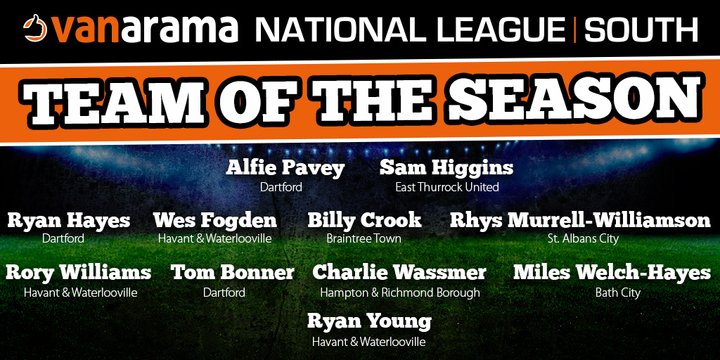 The Vanarama National League South season was probably best summed up by what happened on the final day of the campaign.

One way, then the other, and then back again. The incredible title race was the tightest in any division in world football as it took a last minute goal by Havant to snatch the championship from heartbroken Dartford.

We were treated to a rollercoaster campaign with plenty of quality players shining through.

Today we are delighted to unveil the division’s Team of the Season - the star studded selection from what was another brilliant campaign watch by a record number of supporters.

We asked every club to pick out the best the division has to offer at each position to make sure the right people were rewarded for their efforts over the past nine months.

After all, they are the ones that have seen every player up, close and personal since the first week of August! Why not join the debate on twitter @TheNationalLge?

Ryan Young (Havant & Waterlooville)
How many players can claim they have won both the National League North and National League South? Ryan Young can and his incredible season was - in the end - crowned in a fitting way.

Miles Welch-Hayes (Bath City)
The 21-year-old flying full-back has come of age this season. Not only has he got better as the season has progressed but he has also had a helping hand in a large amount of goals.

Tom Bonner (Dartford)
The central defender has been just as reliable as Tony Burman knew he would be. The Darts’ late season burst saw them win their last nine matches and Bonner has, according to his man, been brilliant in them all.

Charlie Wassmer (Hampton & Richmond Borough)
Sent off in pre-season after losing his cool, and then again early on in the campaign. If manager Alan Dowson has hair, he would have ripped it out. But instead of reading Wassmer the riot act, he stood by his man. He has been a players transformed.

Rory Williams (Havant & Waterlooville)
If you speak to many managers in the National League South, they have this man down as one of the best players in the league. He’s proved their point this term. Expert defending fused with relentless attacking.

Rhys Murrell-Williamson (St Albans City)
It was not the way St Albans wanted their season to end - missing the play-offs altogether wasn’t a conclusion befitting of Murrell-Williamson and his fantastic season. He ended on 12 National League South goals.

Billy Crook (Braintree Town)
When Braintree appointed Bradley Quinton as their manager last summer, the Enfield boss knew what he had to do first - sign Billy Crook! Both have stepped up superbly.

Wes Fogden: (Havant & Waterlooville)
If you need evidence of Fogden’s quality, have a little look at his CV. Two back-to-back titles and a large chunk of the club’s 158 league goals in the past two season have had a lot to do with his industry.

Ryan Hayes (Dartford)
He was with the club when they won the Conference South play-offs in 2012 and with Tony Burman’s team in their third season back in the divisions it’s fair to say Ryan Hayes knows what it’s all about.

Alfie Pavey (Dartford)
A year ago, he didn’t know where to turn. Released by Millwall after six years, he eventually found Dartford - and they are glad he did. Scoring 22 times, he was also named National League South player of the year.

Sam Higgins (East Thurrock United)
Another year, another season full of goals. The Golden Boot winner turned in a 26 goal campaign. He continues to show that appearances can be deceptive.

 Hampton & Harrogate's Sold Out Signs Go Up The sold out signs have gone up already for both the Vanarama National League North and South Promotion Finals.

Orient Release Five & Transfer-List Three Others  Leyton Orient, who have just finished their first season in the Vanarama National League in thirteenth place, have announced their retained list following the conclusion of the 2017/18 season.