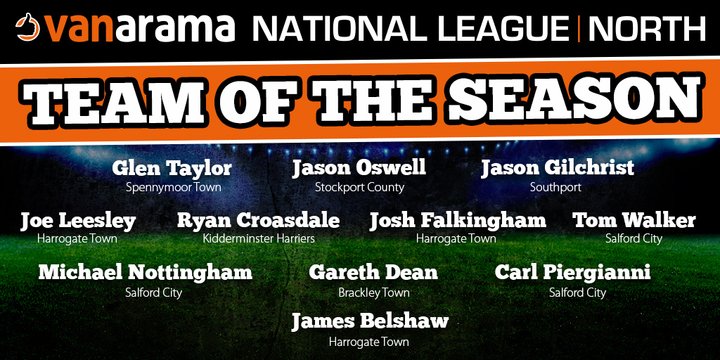 The Vanarama National League North is widely regarded as one of the most difficult leagues in the country - and it’s only going to get harder!

That’s probably why we were treated to a rollercoaster campaign with plenty of quality players shining through.

Today we are delighted to unveil the division’s Team of the Season - the star studded selection from what was another brilliant campaign watched by a record number of supporters.

We asked every club to pick out the best the division has to offer at each position to make sure the right people were rewarded for their efforts over the past nine months.

After all, they are the ones that have seen every player up, close and personal since the first week of August!

It’s tough on those that have missed out but congratulations to the players who made it in - we think this team would do rather well in the Vanarama National League North, don’t you?

James Belshaw (Harrogate Town)
Whilst the number of goals Harrogate scored will grab the attention, Belshaw’s performance should not be underestimated. The dependable keeper joined Town last summer and has proved to be a shrewd addition by boss Simon Weaver.

Michael Nottingham (Salford City)
A reliable defender capable of playing anywhere across the back four, Nottingham is a manager’s dream. He has enjoyed another good season with Salford and also chipped in with important goals.

Gaz Dean (Brackley Town)
Dean knows all about promotion having experienced it with both Nuneaton Town and Solihull Moors. He has shown his quality again this term, leading by example as Brackley finished with the best defensive record.

Carl Piergianni (Salford City)
Piergianni isn’t a new name when it comes to the National League North Team of the Year. He has plenty of experience in this division and he was a very important signing for Salford as they achieved their title ambition.

Tom Walker (Salford City)
Another key signing for the Ammies, Walker has been a revelation since signing from local rivals FC United of Manchester in January. He starred for the Reds after joining them from Stockport County back in October.

Josh Falkingham (Harrogate Town)
Another midfielder with an eye for a pass, Falkingham has been an ever-present for Harrogate this season after joining last summer from Darlington. One of Simon Weaver’s best additions.

Ryan Croasdale (Kidderminster Harriers)
As dependable as they come at this level, Croasdale will no doubt have admirers from higher up the football pyramid. A classy midfield player, the England C man has been a standout performer for Kidderminster.

Joe Leesley (Harrogate Town)
One of the main reasons behind Harrogate’s 100-goal campaign, Leesley has tormented defenders all season from out wide. A haul of 14 goals and numerous assists couldn’t be ignored.

Jason Gilchrist (Southport)
It’s perhaps no surprise to see the League’s top scorer included in the team. After starting the season at FC United, he moved to Southport and the lively forward ended up with 26 goals to his name.

Jason Oswell (Stockport County)
Only missing out on the Golden Boot by two goals, Oswell proved he could cut it in the National League North following his move from Welsh football. His predatory instinct showed at Edgeley Park.

Glen Taylor (Spennymoor Town)
Taylor helped the Moors make the step up to Step 2 with ease. The big striker netted 19 times but his work-rate and ability to bring others into play are also worth a big mention.

 Orient Release Five & Transfer-List Three Others Leyton Orient, who have just finished their first season in the Vanarama National League in thirteenth place, have announced their retained list following the conclusion of the 2017/18 season.

Davies Makes Move To Walsall After 25 Years With Dragons  Andy Davies who ended the season as the caretaker boss at Wrewham is the new Walsall assistant manager.