Mo Is The Man As Iron Become Tough Again! 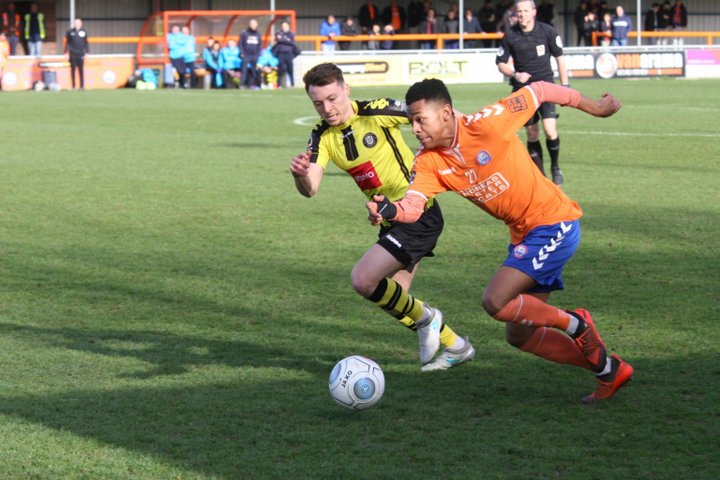 Down but not out seems to be the message coming loud and clear from Braintree Town since their relegation was confirmed last month.

But the drop prompted a switch of emphasis at Cressing Road and boss Danny Searle heralded a new, more youthful look to his Iron side as they began preparing for next season.

Mo Sagaf has put in performance after performance, befitting of a side pushing at the opposite end of the table since joining from Leatherhead.

The highly-rated 21-year-old’s three goals through April helped Braintree to impressive wins over Dagenham & Redbridge, Maidstone United and high-flying AFC Fylde before holding champions Leyton Orient on the final day of the season.

He knows how to put away some stunning goals too, making his an easy sell to the Club’s supporters.

Whatever happens next season, the future sure is bright for the Essex club.

Unfortunately, Mo Sagaf was unable to collect his award this week.

 Moors And Fylde Ready For The First Play-Off Semi-Final If you would have told Solihull Moors fans at the start of the season that they would have to get their skates on as games were going to sell out, not many of them would have believed you.

Top Boss Cook Has Really Got His Teeth Into The Tigers!  When Mike Cook took over at Gloucester City in January, he steered clear of making any great promises.