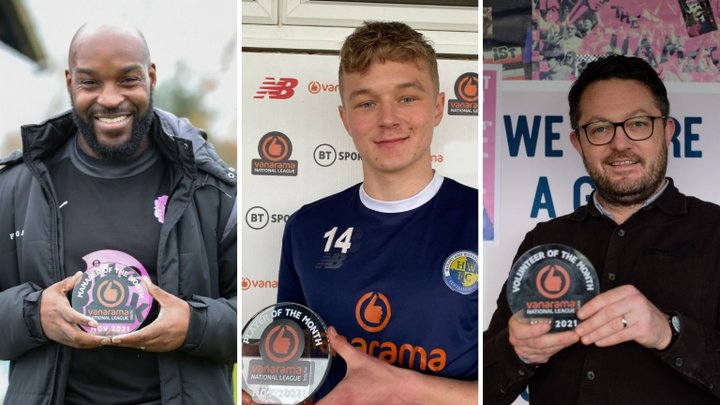 It’s time to honour those who grabbed the headlines in the National League South - and someone who helps draw the crowds in!

We’re pleased to acknowledge those who had a month to remember after an eventful four weeks.

Dulwich Hamlet fans didn’t know their team had a play-off push in store for them - let alone a title assault!

But with things turning very interesting in the division, there’s no doubt they are in the mix as we get close to the half-way point.

Gavin Rose hasn’t had an easy campaign, after contracting Covid a month in, he was forced to take some time away.

He is back now of course and ever since his return Hamlet have been playing happily with the teams around the top.

The Hawks themselves are back in the promotion picture and Paul Doswell always knows who he can rely on.

Joe Newton, the talented 19-year-old, joined from Coventry in the summer and has enjoyed a bright start to life with the club.

The left wing-back has contributed at both ends of the pitch with the side picking up seven points from three games in November.

He can really defend too, helping earn three clean sheets - and his experienced manager knows he will be a star of the future.

We can’t get enough of the Vanarama Volunteer Of The Month award.

There’s nothing better than ensuring those who dedicate their time to their club are given the recognition they truly deserve.

You can’t have failed to notice a number of sell out crowds at Dulwich Hamlet this season.

Paul Hamilton is always on hand at Champion Hill to make sure your visit goes with a swing.

He designs lots of the merchandise for the Dulwich supporters trust to sell in the shop, and also puts together posters to be put out to attract the local community.

No wonder they have had to put the ‘sold out’ signs up so often this season!

Like many who offer their expertise to the south east Londoners, the super fan wouldn’t dream of charging his beloved club.

The team are certainly rewarding his loyalty this season and it looks like the most exciting campaign for years.

Congratulations to all our fantastic November winners!

Trio Celebrate November National League North Accolades  It was a month to really remember - so it’s high time we put awards into the hands of some very worthy recipients.