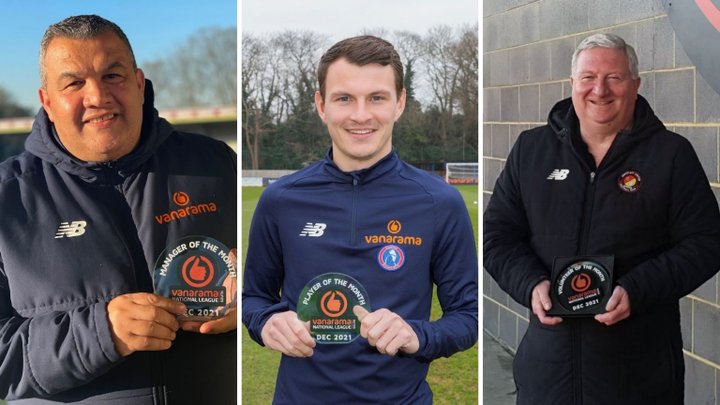 There were quite a few in the National League South who ended 2021 in some style.

Now we want to introduce you to December's big award winners!

Maidstone United started the season like an express train - and ended the year in similar fashion.

After falling off the track, this was the month when they really turned things around at a high speed.

Hakan Heyrettin refused to panic as their rivals put win after win on the board.

The Stones started the month with an impressive 4-0 home win over then leaders Dartford. They then edged Tonbridge Angels and whacked Welling United 4-1.

They conceded just once in the month, and ended the year seven unbeaten and level on points with leaders Oxford City.

Alfie Rutherford has confidence running through his veins right now.

That is down to a deadly month in front of goal for Dorking Wanderers and he helped fire his team back into an incredible title race.

Ruthless Rutherford scored no fewer than eight goals in five games in December - including two hat-tricks.

Starring in Dorking’s 8-0 demolition of Havant & Waterlooville on Boxing Day, he put his old club to the sword in style with a treble.

He’s now the division’s third highest scorer - and is eying a trophy filled 2022!

We love the Vanarama Volunteer of the Month as those who give up their precious free time for their club get some deserved acknowledgment.

He’s part of the club’s ‘divot squad’ - working tirelessly to make sure the Fleet’s surface is fantastic.

He has been doing it for years and recently became the voice of the ground, too - stepping up into the role of matchday announcer.

The club say he makes sure the home and away fans enjoy their experience and he had no hesitation in stepping in.