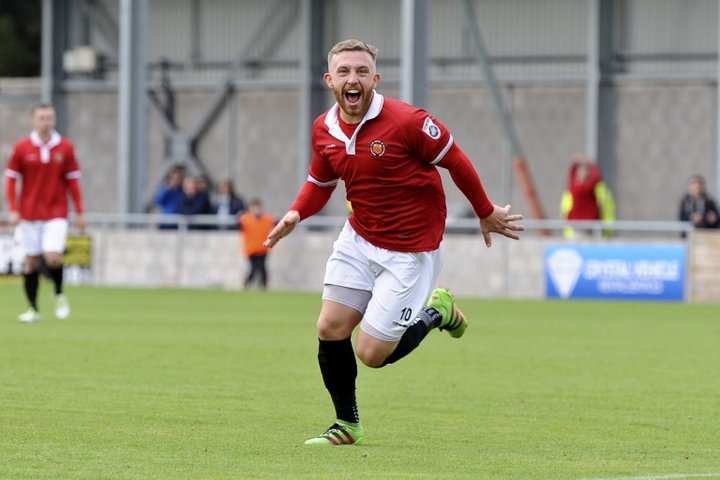 FC United of Manchester manager Karl Marginson had no doubt whatsoever that things would turn around quickly for the club.

His struggling team had lost four of their first five matches but told us before the weekend’s programme that he was happy with performance levels in most of those games.

Not panicking has paid off for the Red Rebels and a Bank Holiday double has spun their season on its head.

Six points from a home game with Boston, which they won 2-1, and on Monday at York City – a 2-0 success – gives things a totally different perspective.

“Every single one of them were first class,” manager Marginson said after a great first away win of the season at Bootham Crescent.

“We’ve built a tremendous team spirit with a new group of players. We saw that in abundance against a very physically strong York team.

“We rode our luck, but there has been plenty of time we haven’t had that luck on our side so far this season,” the boss told FCUM Radio.

“The plan was to play on the counter attack and we did that. When they went down to ten men it would have been easy to panic and try and force things but we remained patient.

“When you are playing away from home, the pressure is on the home team to go and get a result so it was perfect for us to sit behind and defend it well, and look to counter.”

He adds: “We took our chances when they arrived and you saw what it meant to everyone at the end.”

 Collier: Chippenham Enjoying National League South Chippenham Town made it three games unbeaten in the league and picked up their first home win the process for the season after beating Oxford City 3-2.

Hodges Delighted To Return To Winning Ways  Truro City manager Lee Hodges was delighted to see his side make a return to winning ways with their 2-1 Bank Holiday Monday victory over Weston-super-Mare.