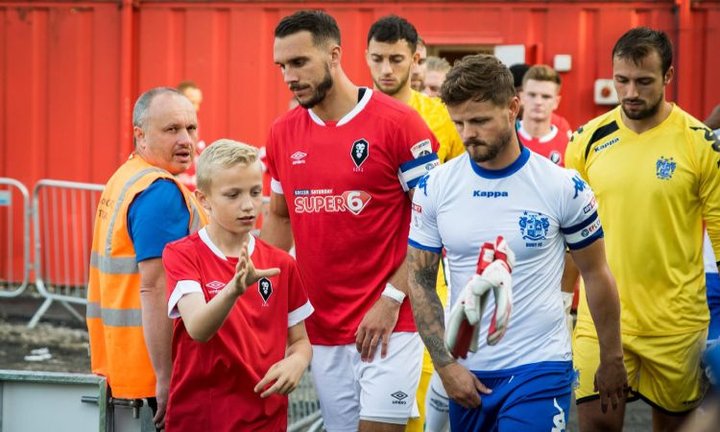 Salford City have announced that Liam Hogan will be the captain for the upcoming 2017/18 Vanarama National League North season.

Salford-born centre-back Hogan, 28, was signed from National League side Gateshead in the summer, who he captained to an eighth-place finish last season.

He told the club website: “I’m absolutely delighted, obviously I've stood in a few times previously in former teams and last year I took the role on full time and really enjoyed it; it adds something extra and as my local team, I couldn’t be happier.

“If you look at our dressing room I’m lucky because it’s a tough choice for the gaffers; there’s four, five, six lads that have been a captain, or got the little extra things a captain needs.

“I’ve been in this league before with Halifax and we went up via the play-offs, and I’m not saying if we were to go up via the play-offs it would be a bad thing this year because it’s not - promotion is the ultimate goal - but to actually win the trophy, to be the outstanding team over the number of games we’ve got to play, it’s a tough league and that’ll mean more than anything really.

“I’ve had a few good moments in football but to actually do that, that would top it, and that’s a long way to go but essentially I would love to see this team and myself, next year, in the league above.”

Joint-manager Bernard Morley commented: “It was very tough, there’s a good four or five leaders out there which is a good thing for us going forward.

“He sets examples, he works hard on and off the pitch; it was difficult but I think we’ve picked the right one.

“The main thing for a captain that we’ve learnt over the last nine years is that your captain is your manager, he’s the manager on the pitch, he’s your eyes and ears, he’s in charge out there and it’s important that he’s singing off the same hymn sheet as me and Jonno in terms of leadership and commanding better around him from his players.”

Hogan will lead the team out in this afternoon’s opening fixture at Moor Lane against Darlington FC.