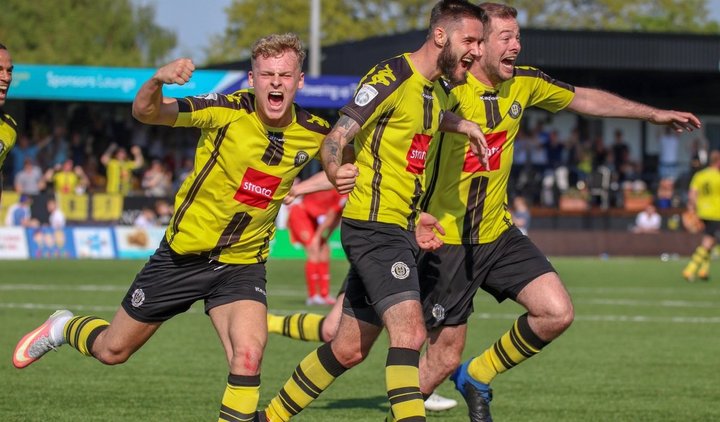 Striker Dom Knowles wants to be the hero once again as he looks to take Harrogate Town up to the Vanarama National League.

The forward who has scored seven times in his last two games is now competing for a place for promotion on Sunday, writes Tom Feaheny.

Knowles scored from the spot and then grabbed a goal in the 94th minute to win them the game against Chorley.

The forward is the Harrogate Town special player feature in the official matchday programme this weekend.

Knowles who has been with the club for the past three seasons says he wants to make an impact again.

He said: “It is my job to score goals, as simple as that and I want to add more to my tally in this game, in big games you want to make a difference.

“Promotion would be massive for everyone, I know how much going up would mean for everyone at the club, the players, staff and fans, all the hard work that has been put in by us all, could be rewarded.

“When the season began, this is the kind of way you want it to end, the chance to go up is what we all love being involved in.

“It wouldn’t just be a good thing for the club, the town itself would benefit from this as well and there are a lot of good people that I know would be pleased, it would mean a lot for them.”

Read the full 900-word feature with the Harrogate Town striker in the National League North Promotion Final Programme - on sale inside the CNG Stadium this Sunday.

 Dowson Knows Stage Is Set For Beavers No-one would have had a Hampton vs Braintree final in their heads this time a week ago. What with the form of Dartford and of Chelmsford City going into the last Sunday’s semi-finals.