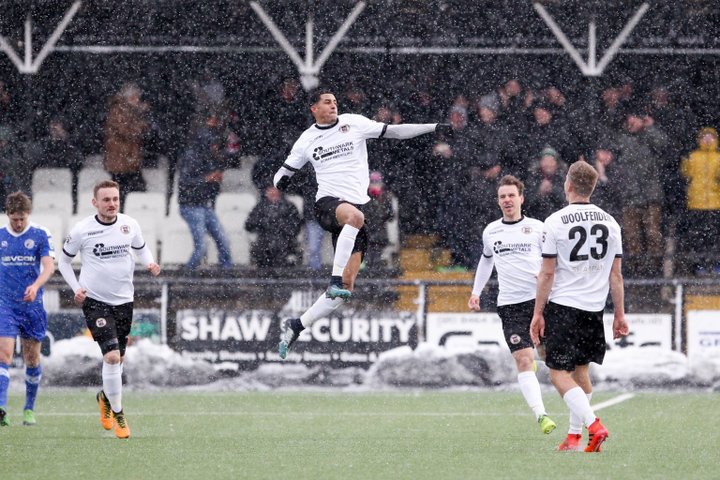 Louis Dennis has revealed the secret behind Bromley’s togetherness - mind-numbing coach trips together!

The Ravens face Sutton United on Monday in the live BT Sport game in a fixture they really need to win if they are to make the National League play-offs.

They put in a real shift on Good Friday. Playing for the whole of the second half with ten men they pegged title-chasing Wrexham back and came away with a well earned 1-1 draw.

That came after Neil Smith's side sealed a place in the FA Trophy final after holding firm up at Gateshead last weekend.

Top scorer Dennis missed the Wrexham game through injury but hopes to be back for the trip to Gander Green Lane.

While teams often hit the bowling lanes and play a little FIFA to build rapport, the 13-goal striker says being locked up together for hours on end has brought them closer together as a group.

“The FA Trophy run has clearly been great but it’s not just the results and getting to the final which has helped,” he said.

“Talk about doing things that hard way! Some of the trips we have faced to get the Wembley have been the longest anyone could ever imagine.

“We’ve been to Blyth Spartans, to Workington, to Gateshead of course last weekend and Spennymoor not once but twice - Darlington for the second day on a Wednesday night.

“Then last Tuesday after getting through, we went back up to the North East to play Hartlepool in the National League!

“But the road trips have really helped bonding. We all got very close and especially as we were a near totally new squad this season we really needed that time together. They were long, very boring trips but we passed the time together.

“We’ve certainly put in the miles to get to Wembley but our only focus now is trying to get into the top seven. While there’s a chance we won’t give up.”

It’s a 3G derby which means at least they won’t have to be weather watching.

“We all remember what happened when we went all the way up to Spennymoor for the FA Trophy quarter final,” Dennis told us. “We got there and with an hour to go until kick-off the game was called off.

“At least there won’t be that problem on Monday and it should be a great game.

“We look at Sutton and what they’ve achieved over the past few years and maybe they are a club we need to look at.

“We’ve done better than many people predicted, that’s for sure. It went from us being one of the sides people thought would struggle to a team who surprise them.

“We want to end the season as strongly as possible and if we can win at Sutton then we’re still in there as we have games in hand on some of the sides above us in the table.

“The fact that the game in live on BT Sport just adds to it. We need to go there and be positive.”

 Five Things You May Have Missed In The National League The weather may have reared its ugly head again but the Vanarama National League largely overcame it with two days of enthralling drama.

Elliott Hails Best Win For His Pilgrims Side Since He Arrived  Boston United boss Craig Elliott says his side really delivered after gaining victory against Kidderminster Harriers.