Key To Hampton’s Unbeaten Run? Beers With The Boss! 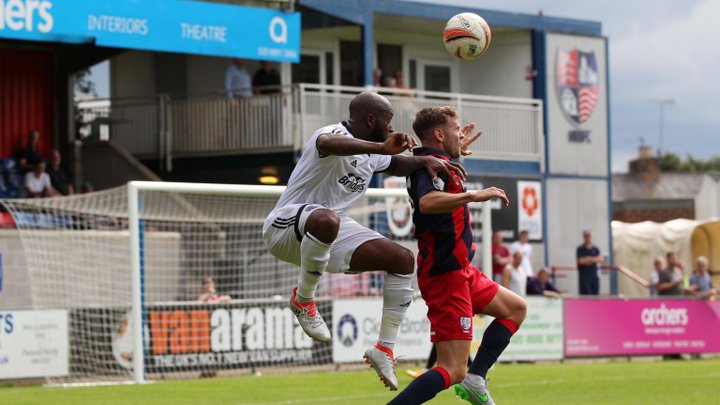 Alan Dowson revealed the reason behind both his Hampton side’s great season and the brilliant form of defender Charlie Wassmer - a few pints of beer.

The centre-back was in the manager’s bad books back in August and hit out at him in the press for missing no fewer than six matches through suspension.

But since his careless pair of red cards in the first month of the season, Hampton haven’t lost in the National League South.

Wassmer scored for a fifth time this season to open the scoring against Wealdstone on Boxing Day, but a header just before the break from Abobaker Eisa made it 1-1.

Hampton hit the woodwork three times in the second half but couldn’t break through and Dowson said: “We were very unlucky, you are thinking ‘what more do you need to do to win it?”

“Bobby (Wilkinson) has got them well organised, but you need to hit the back of the net and it’s a shame we didn’t convert some of those chances.

“We needed Charlie (Wassmer) to get the goal for us again and he has been absolutely outstanding.

“He has been phenomenal for us this season, absolutely phenomenal. He’s been the best player at this football club for a long time.

“I trust him totally, we sorted it out and we went down the pub and had a pint and talked about it. Since then he has been great. It’s not a problem now.”

Hampton have no game this Saturday but on New Year’s Day it’s the reverse fixture at Wealdstone.

“Bobby will have his team up for that but we’re just delighted to be where we are,” Dowson added.

“We’ll be ready too and after two draws now hopefully we can get another win again.”

 Nuneaton Boss Maamria Wants More Of The Same Nuneaton Town boss Dino Maamria says his side showed what they can deliver after a 4-1 win against Tamworth and wants a repeat performance.