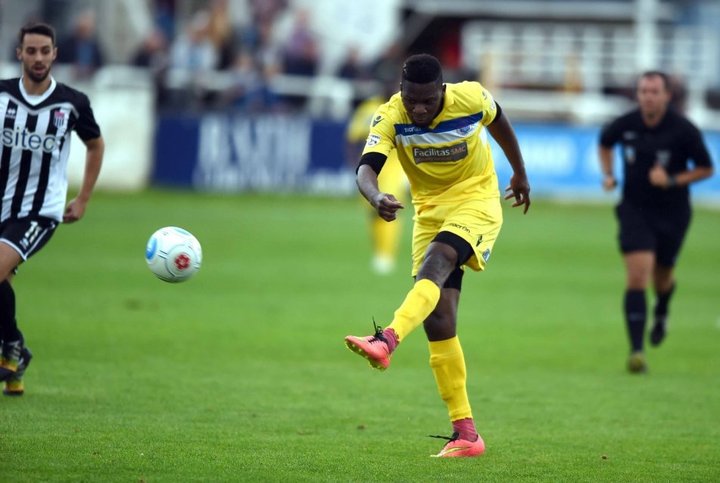 Oxford City manager Mark Jones has been busy shaping his squad for 2018/19.

Just over a week since City’s season ended, and the preparation for the next campaign is already well underway.

Similarly, both Joe Oastler and Robbie Sinclair will remain with the club, having signed two-year deals upon their arrivals in 2017.

However, Lee Henderson, Godfrey Poku (pictured), Freddie Grant, Ezra Forde, Mamdou Fofana and Justin Bennett will all be moving on from the club this summer:

Henderson joined the club in 2013, making 138 appearances as he established himself as a key figure in the City defence as they.

Poku ranks among the most consistent performers for City in recent memory.

Joining in 2016, his versatility and professionalism made him an instant hit at Marsh Lane and earned him the supporters' player of the season award.

He leaves having made a total of eighty-eight appearances, netting 6 times.

Grant was a 2016 summer signing and made the left-back position his own as he racked up seventy-four appearances over the course of his two seasons with the club.

Forde is a young striker with bags of energy who made thirty-two of his forty-six City appearances as an impact sub.

But, despite his limited playing time, Forde was highly-rated by supporters, thanks to his impressive workrate and eagerness to make the most of every opportunity presented to him.

Fofana's second spell with the club comes to an end with the commanding midfielder having made a total of sixty-two appearances.

A tall, strong, and composed midfielder, Fofana has played an important role protecting the defence to allow his more flamboyant colleagues to push forwards.

Bennett is an experienced and highly-rated forward who joined the club last summer to recreate the partnership with Matt Paterson which saw the pair bag a combined 58 goals for Gosport Borough in the 2014/15 season.

Unfortunately, an injury sustained in pre-season ultimately put Bennett out for the season after just one substitute appearance.

Jones told the club`s Pitchero website that these decisions had been extremely tough: “I’d like to sincerely thank all of the players that have left the club. It’s never easy to say goodbye to people that you have worked closely with and that have contributed so well to the team over a period of time.

“In the cases of Lee Henderson and Justin Bennett; both players have been very unlucky with injuries and obviously haven’t played enough. We felt that we couldn’t offer them contracts for next season. Lee has been at the club for some time and the first thing I did when given the opportunity as Manager was make Lee the captain. He has served the club well, but sometimes a new challenge can refresh you and we felt it was time to maybe shake hands and move on.

“I would’ve liked to have kept Freddie Grant, but unfortunately he made it clear that he felt he needed a new challenge and was reluctant to commit to the club. After a lot of discussion, we decided that we’d let him go. I believe Freddie has many attributes to be a top player at this level, but at the same time we need players that are 100% committed to the cause. We wish him all the best.

“In the cases of Mo and Ezra, I don’t think either player has really played enough. They are both fantastic lads and again wish them well moving forwards.

“Godfrey Poku was a very difficult one. He is a very good player and has been a key player for the club over the last couple of seasons. Unfortunately, he lives in South East London and the two hours plus that it was sometimes taking him to get to Oxford three times a week was starting to take its toll. He has interest from clubs closer to his home and I felt that midfield is an area where we’ll be okay next season.

“I do also have to make savings, working with a reduced budget next season and need to build a balanced squad, so difficult decisions have to be made. These decisions aren’t easy ones, but as always I try to make them with the best interest of the club and team at heart”.

Sonupe Agrees New Deal To Remain With Kidderminster  Kidderminster Harriers have confirmed that Manny Sonupé will be remaining with the club after his deal to stay at Aggborough was extended.