It's Oates So Simple For Rhys As Rampant Pools March On 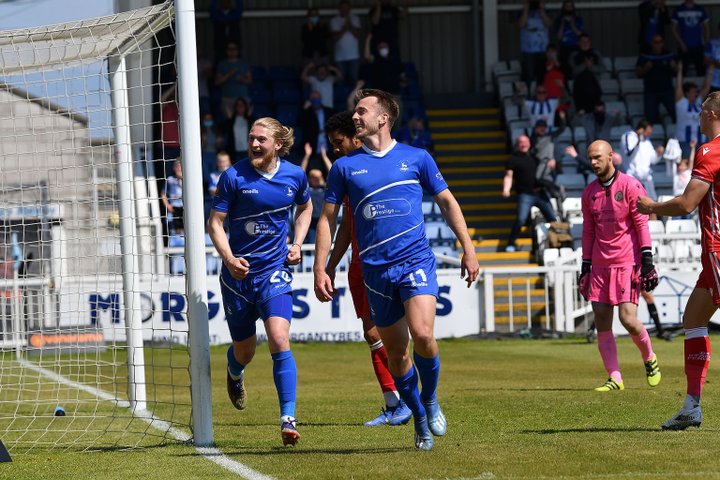 Rhys Oates took the play-offs by the scruff of the neck to put Hartlepool one win away from the Vanarama Promotion Final.

Oates got a goal either side of Luke Armstrong's strike as the home side saw off Bromley.

Nicky Featherstone picked Oates out with a raking ball before the striker composed himself to finish well and opened the scoring – but Hartlepool were only just getting started.

If he isn’t scoring, Oates is usually setting one up.

The prolific striker turned provider three minutes later, chasing a long ball and cutting it back to Luke Armstrong who made himself space before firing past Mark Cousins.

He started the five-minute blitz and Oates was about to finish it.

Gavan Holohan saw his initial effort blocked but Oates latched onto the rebound to put the Pools into a commanding lead.

Chris Bush did his best to get Bromley back into things, but Gary Liddle did just as much to thwart him – clearing his looping effort off the line with a diving header.

Ravens boss Andy Woodman introduced James Alabi after the break and whatever he said worked wonders.

It took the towering striker just three second half minutes to register a goal back for Bromley.

Jude Arthurs' cross found its way to Alabi who nodded one back as the visitors looked to make a game of it.

But the damage would prove to be irreparable.

The sides traded blows for the remainder of the second period and although Bromley got another goal back through Byron Webster with seconds left, it was a step too far.

Hartlepool will now travel to Edgeley Park next Sunday for a semi-final with Stockport County.

 LV BET | Vanarama National League Play-Off Semi-Finals Preview It can’t be quite as good as last weekend, can it?