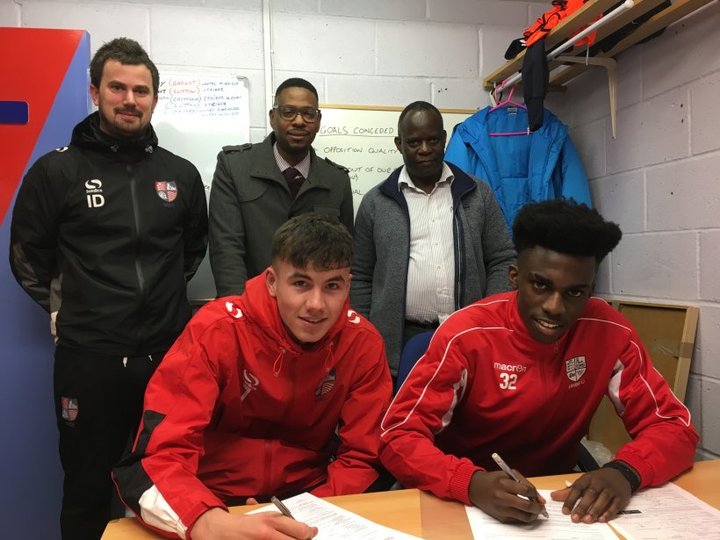 Dylan Randall (pictured on the left) made his debut for Hampton & Richmond Borough last Saturday and it turned out to be a record, but it took some investigation from the club historian Les Rance to confirm it!

Rance himself tells the tale: “I was asked by Ian Dyer to find out whether or not Dylan was the youngest player ever to represent the club in a first-team game.

“As far as I have always been aware the youngest player making his debut was Perry Tunesi.

“Perry made his debut on 17th August 1974 (v Staines Town, 0-0). Perry went on to make 380 appearances scoring 54 goals in a 12-year period. When Perry (here on the right, in the centre) made his debut he was described as a '16-year-old prodigy'. Unfortunately, there is no accurate record of his age from that time.”

“So, a bit of Internet digging was required and I was able to confirm that Perry Tunesi was born in September 1957, in Middlesex, but couldn't tie it down to a particular date. The only other thing that I knew about Perry was that whilst playing for us he was often away studying at University.

“So, next step, putting in Perry Tunesi into Google search. I came up with a few possibilities. One of them seemed likely, given his university education.

“There is a Perry Tunesi who is the Principal of Sha Tin Junior School, in Hong Kong. The photo on the School website looks like a man who would be aged around 60. There was an email address for him, so nothing ventured.......

“I sent an email on Monday evening, knowing that there is a time difference between us and Hong Kong, I had to wait until Tuesday to see if there would be a positive reply to my email. Low, and behold, on Tuesday morning, a reply from Perry.”

“And the date of birth is 16th September 1957. Prior to his debut he had played for Hampton under-16s in 1973/74, having returned from Australia to the UK in 1973. Perry says he will watch Dylan's progress with interest.

 Yates: Moors Making Improvements But Need More Points Mark Yates is happy with the progress Solihull Moors at making but knows they must start picking up maximum point hauls, starting this weekend.