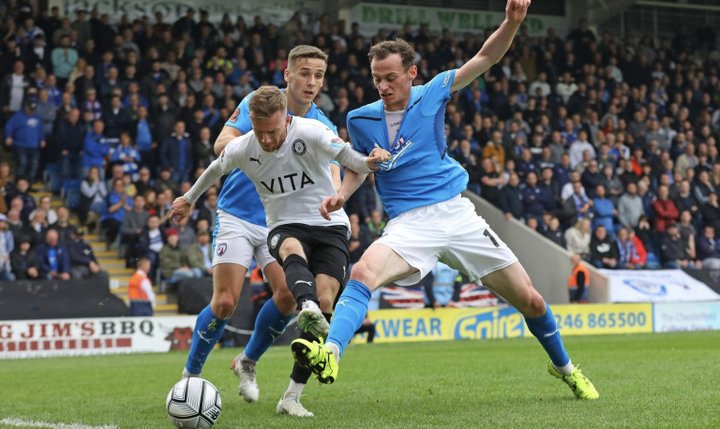 There’s a double dose of BT Sport action ahead this weekend - and you won’t want to miss a minute.

We have a title shoot out as a main course but the appetiser is lip-smacking as last year’s beaten Promotion Finalists Torquay United host a side who could really do with a win right now.

Chesterfield have gone from being big title contenders to a team who are simply battling to get into the top seven but striker Tom Denton tells us all hope is not lost.

Ahead of the game he says a win will make it tough for Dagenham to grab their promotion place - and could be the spark they need.

He said: “We go to Torquay knowing a win will probably do it for us.

“It’s been a tough run but our performance against Stockport County on Monday was good and if we can take that down to Torquay on Saturday we know we can pretty much seal the deal.”

There will be plenty of eyes on what is going on a day later.

On Sunday we could crown this season’s National League champion - or it could throw the title race wide up again.

Dave Challinor says there is no extra motivation knowing Stockport County can get the job done at Wrexham - the home of their big title rivals.

It seems like all bets are off after they beat Chesterfield on Bank Holiday Monday and the Dragons were pegged back by ten-man Boreham Wood.

Challinor knows three points will do it but is calm heading into the final three matches.

He told us: “There’s not been any nerves from my side these past few weeks.

“I said to the players after we lost a few games that I have real belief in them and what we’re doing.

“You have got to be big enough to step through adversity - but you have to embrace it, you have to thrive on it.

Wrexham manager Phil Parkinson has called on the club’s fans to raise the temperature on Sunday.

He told the Evening Leader: “We have enjoyed the atmosphere at the Racecourse, it is the last home game and we are looking forward to finishing the league season off with a really good performance against our rivals.

“I think there has been a good connection which has built up throughout the season between the supporters, the club and the players.

“That is down to several factors. Obviously the ownership has brought new life into the football club, and the supporters have really identified with the honesty, commitment and work of the players.

“That is the mantra we want to stick to and keep because we know our supporters will get right behind us if they continue to see the effort the lads are putting in.”

Torquay United vs Chesterfield kicks-off at 12.30 on Saturday with Wrexham vs Stockport County coverage underway at midday on Sunday on BT Sport