Greaves: FC United Have A Big Survival Task Ahead 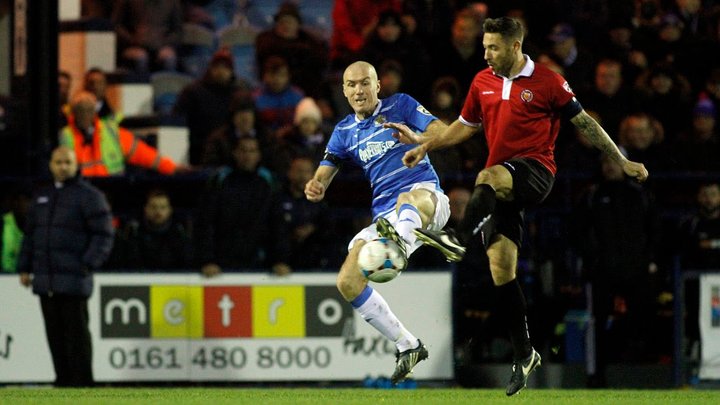 FC United of Manchester manager Tom Greaves accepts his players have a big fight on their hands to retain their National League North status.

Defeat to AFC Telford last weekend threw the Bucks a lifeline - and kept the Red Rebels in trouble.

Greaves had a great start to life in the United hotseat but the last few weeks have been testing to say the least.

Three defeats in their last four games with no goals scored paints a clear picture for the player-boss with the team in what he calls a ‘mini slump’.

He backs his players but knows it’s time to get a win to propel them up the table - starting with this Saturday’s home game with fellow strugglers Gainsborough Trinity.

It’s now a big game for the club and the United boss needs the Broadhurst Park atmosphere to be at its best.

“Telford was not the result or the performance we needed,” said the former Bradford PA player.

“No excuses - we just wasn’t good enough as a group and that was really disappointing.

“We now have ten cup finals for starting at Broadhurst Park next week in a big match for us against Gainsborough.

“We’ve got to dig deep as a club now, get ourselves out of this bad run and make sure we are playing in this league next season.”

 Quinton Needs Braintree Town Reaction To Continue Braintree Town boss Brad Quinton says his players gave him everything he asked for after last time and wants the same again.

Boss Gray Urges His Minstermen To Shape Up For Play-Off Push  Martin Gray has called on his York City side to cut out their defensive errors as they look to confirm their play-off spot.