Five Things You May Have Missed In The National League 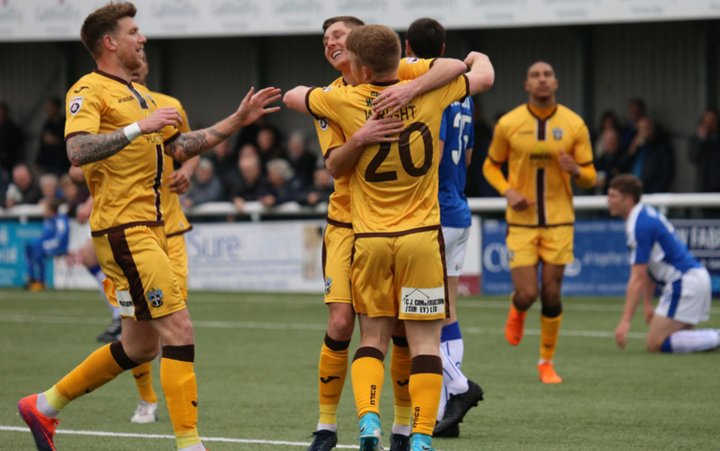 It’s been a crazy season across the Vanarama National League and it only seems to be getting crazier!

It was another massive weekend of big results, big goals and big talking points up and down our three divisions.

We’ve got new leaders again in the National League

With Macclesfield Town out of action, Sutton United knew a victory over Chester would send them back to the summit. The U’s won 3-2 and are on top again thanks to their superior goal difference. Tranmere, Wrexham and Aldershot all won too, putting plenty of pressure on the Silkmen who return to action on Tuesday night against Gateshead.

Are the play-off places effectively sorted?

Five points now separate Dover Athletic in the final play-off place and AFC Fylde, who are looking to break into the top seven. The Coasters went down at Dagenham & Redbridge on Saturday whilst Ebbsfleet also came unstuck at home against Maidenhead United. Bromley have games in hand and you never say never in football but the top seven will be hard to displace now.

There always seems to be at least one team that slides down the table and gets pulled into a relegation fight they had no intention of being a part of. The Cards have won just twice in the National League since the end of November as a campaign that, at one point, had so much promise continues to fade. Now they’re just four points above the relegation zone with seven games left.

Did Salford City produce one of the finest comebacks in history?

Aggborough witnessed one of the craziest games of football in recent memory on Saturday. Kidderminster were terrific for 75 minutes and were deservedly leading 4-0 against leaders Salford. Surely no way back, then, for the Ammies? Think again. Three goals in the last ten minutes made it 4-3 and then they were awarded a penalty in the 95th minute. Just to add even more drama, Tom Walker’s spot-kick was saved by Brandon Hall before he netted the rebound.

It continues to be a title race you just can’t take your eyes off. Havant & Waterlooville picked up a big win at Bath City thanks to Theo Lewis’ goal six minutes from time. The Hawks continue to show all the qualities needed to win the title. But they have plenty of competition still. Dartford, who put in a professional display to beat Oxford, are only two points adrift and Hampton fought back for a point against Braintree. It’s still all to play for!

 Beatson Extends Loan Stay With League Rivals Until Season`s End Defender Brad Beatson has had his loan with Gainsborough Trinity extended by league rivals Boston United until the end of the season.

Tudors Aim To Lure In Fans With Football For Only A Fiver  Hemel Hempstead Town are offering fans an early Easter present - football for £5.