Fit And Firing, The Stones Start To See The Real Turgott 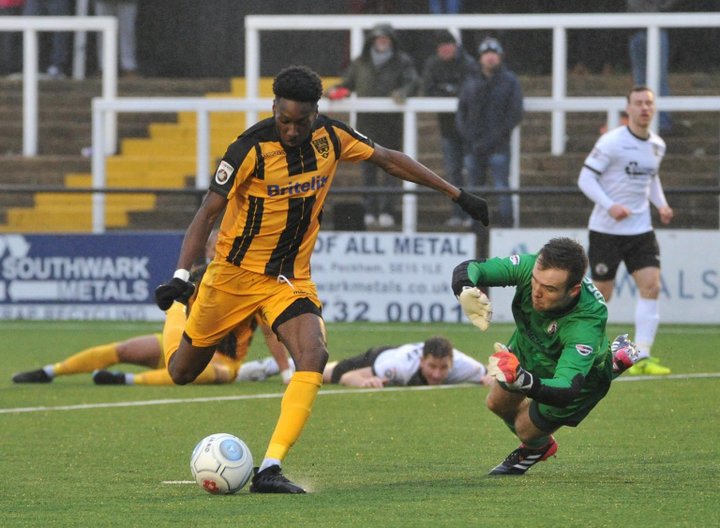 The National League is now seeing exactly what Blair Turgott is all about.

That is the assessment of Maidstone United manager Jay Saunders, whose side beat Dagenham 2-1 last night thanks to the forward’s two goals.

Turgott was excellent too on Saturday and again scored in the 1-1 draw with Hartlepool United.

Saunders says the three-goal forward is now coming into his own.

“It’s always important to get your first three points on the board as quickly as possible so I’m delighted,” he told the club’s soundcloud service.

“I know people will be saying Dagenham have lost players and this and that, but it is always a very difficult place to come.

“In fairness they worked really hard and made it difficult but we had enough.

“We weren’t quite at our free-flowing best like we were in the second half against Hartlepool but it was a different type of game.

“We need character and we showed it. We need quality too and Blair provided it twice.

“He nearly had a hat-trick. Last season we didn’t have him fully fit but now you can see he is really firing.

“He’s now chasing back 60 yards to help the team and he can finish at the other end as well.”

 No Victory Yet But Harriers Are Going In Right Direction Kidderminster manager Neil MacFarlane says his side totally dominated against AFC Telford.

Stockport Have Set The Standard High Says Gannon  Jim Gannon sees no reason why Stockport County can’t soar if they play with the intensity they did on the opening day.