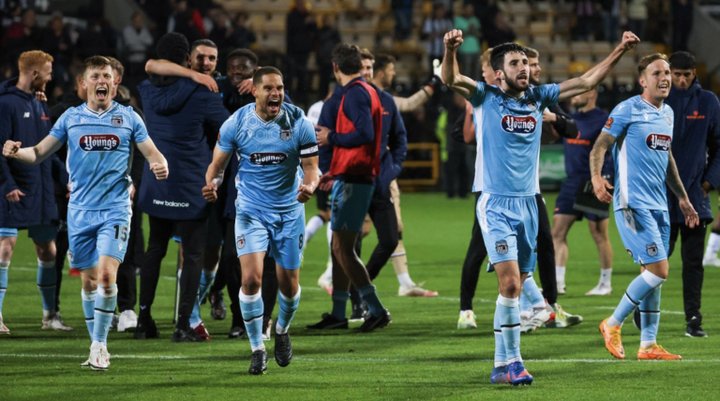 Wild scenes were sparked in an electric opening Eliminator as Gavan Holohan netted in the 96th minute of regular time to earn an extra half an hour.

Then, with the second ticking down and penalty kicks almost certain, a bundled goal from Emmanuel Diesruvwe caused pandemonium among the away fans.

It was more play-off heartache for Notts County, who face having to pick themselves up again for the third summer in a row.

But for Grimsby they secured a tie at Wrexham on Saturday and manager Paul Hurst couldn’t be prouder.

“Did I think we deserved to take the game into extra time? I really did,” he told us.

“Did I think we were going to do it? No, I’ve got to be honest. We came up with something just when we needed it.

“It was incredible character from the players, it would have been so harsh to lose that game.

“But I have to offer my commiserations to Notts County. To be so close must make it even harder to take.”

 Unibet's FC Halifax vs Chesterfield Big Play-Off Preview Part two of the play-off drama is hours away - now it’s the turn of FC Halifax Town and Chesterfield to put on a show.

Unibet's Big Notts County vs Grimsby Play-Off Preview  The talking is finally about to stop and the click of seatbelts being buckled has been heard around the country - are you all strapped in for another play-off rollercoaster?