What Happened On Tuesday Across The National League 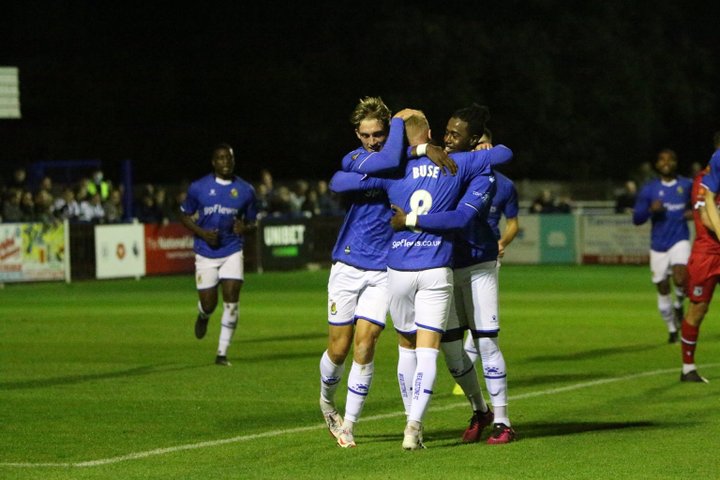 It was certainly a night of shocks and surprises in the Vanarama National League.

Leaders Grimsby Town had an off night as they went down to a rare defeat at Wealdstone.

Wrexham’s new owners watched on but they probably wish they picked another game to fly in for.

The Dragons lost 3-2 at Maidenhead United, Josh Kelly ruining the turn around for the ten men.

Stockport County were undone by brave Barnet as goals from Josh Widdowson and Reiss Greenidge earned a 2-1 victory, but the eye-catching win was soured by their opening scorer’s bad injury.

It was a good night for Chesterfield as some of those around them stumbled.

Kabongo Tshimanga once again got the all-important goal as they won 1-0 at home to Eastleigh.

Boreham Wood had Scott Boden to thank for their 1-0 win at King’s Lynn Town.

The live BT Sport game was played in front of a big crowd but they couldn’t cheer an Altrincham win.

Joe Sbarra turned things around as Solihull Moors pounced for an impressive 2-1 victory.

Aldershot’s problems continue after Weymouth took home all the points from the EBB.

It was an impressive night for Leamington - they beat Farsley Celtic 3-0, days after the Yorkshire club toppled leaders AFC Fylde.

Joe Parker was at the double for the Brakes before Dan Turner made the points safe midway through the second half for Paul Holleran’s men.

Southport picked up for their three points in style as they defeated Darlington 3-0.

So did Hampton & RB - Gary McCann’s team came back from 2-0 to win 3-2 at Welling United, Niko Muir with the winner.

 No Rusk And Reward For Stockport As County Sack Simon Stockport County have dispensed with the services of manager Simon Rusk, the club have announced.

Unibet's Vanarama National League Matchday 13 Preview  When the action is as good as it’s been so far this season, another installment on Tuesday night can’t come quickly enough.