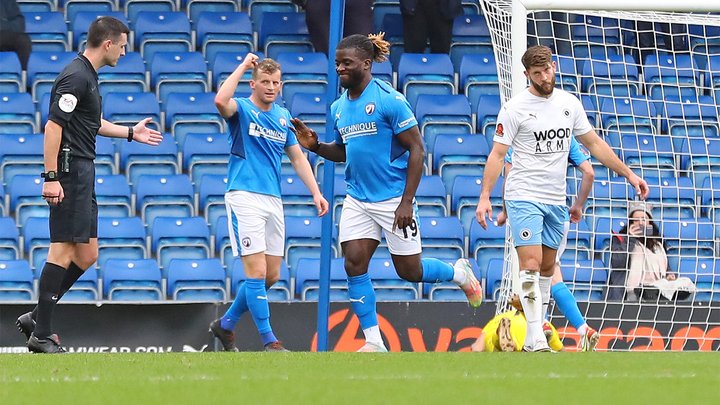 It was another big day across the three National League divisions as all the clubs returned to league action.

Chesterfield won the afternoon’s big game against Boreham Wood - and it was typically an old boy who stole the headlines.

But Grimsby Town remain top as they won yet another home game.

Notts County halted Stockport County’s recent revival - Frank Vincent got what turned out to be the winner in a 2-1 triumph.

Bromley keep on winning - Michael Cheek’s penalty saw off Aldershot, 3-2 it ended in another classic between the sides.

Kevin Mather’s tenure at Southend United got off to a forgettable start - Dagenham just too deadly, Sam Ling the destroyer.

The BT Sport live game was a thriller.

Maidenhead United got their first win since August as Sam Barrett’s late winner sealed a 3-2 victory over Woking.

Callum Maycock was the Solihull Moors hero as they edged out FC Halifax Town.

Paul Mullin scored again as Wrexham’s breezed past Barnet 3-0 at the Hive.

In the National League North, leaders AFC Fylde’s unbeaten start is over.

Omari Sterling-James got a double as Kidderminster Harriers hit Bradford PA for five at Aggborough.

Mark Beck kept York City looking up as they won 1-0 against Chester.

In the National League South, leaders Dartford’s day off wasn’t capitalised upon.

Maidstone United lost 2-0 at home to Dorking Wanderers, while Oxford City had to settle for a draw as Chelmsford City struck late to break the ten mens’ hearts. Adam Morgan made it 1-1.

Slough Town struck early to beat Havant & Waterlooville, while there were also wins for Tonbridge Angels and Dulwich Hamlet.

Will It Be Another Cracker For The BT Sport Cameras?  Both these clubs want to know what impact their FA Cup exploits will have on their National League ambitions - with viewers keen to find out if it'll be a dramatic repeat performance.