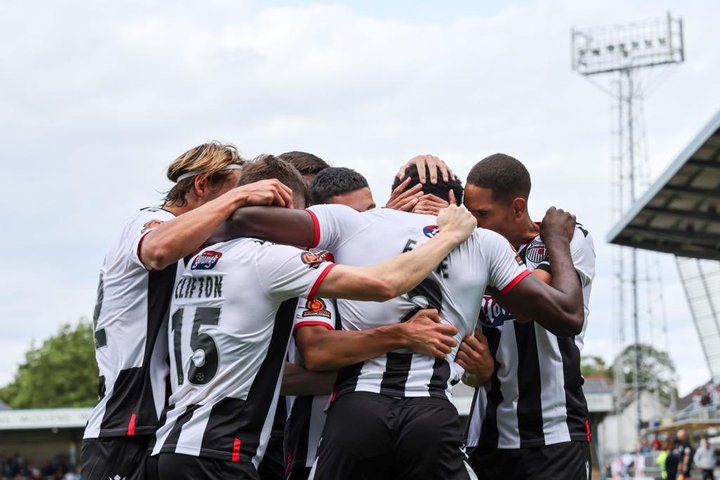 It may not have reached the epic heights of last weekend’s 50 goal afternoon, but Saturday’s National League action was full of vita late goals.

Grimsby Town have made a great start to life outside of the EFL again and Paul Hurst’s team showed everyone they mean business.

They came from behind to win 3-1 at Torquay United, pictured. Harry Clifton making the game safe in time added on.

Boreham Wood have had a blistering start and a fourth win from five was earned at Bromley.

Tyrone Marsh’s late, late winner sending them to the summit for a few hours at least.

Chesterfield had to settle for a 0-0 draw at Dover Athletic.

It was frustrating for Notts County too as Weymouth bit back through Andy Robinson to earn a 1-1 draw.

Wealdstone got their first win - and it came 11 minutes into injury time!

Medy Elito made it an afternoon to remember for the Stones fans at home to Altrincham, 1-0 it ended.

In the National League North, Spennymoor Town were this weekend’s big scorers.

They thrashed Farsley Celtic 6-0, Glen Taylor putting away a hat-trick.

Chorley fired in nine last week and this week got four as they eased past Chester.

The top two both won and sit on 16 points.

Alex Whitmore was the AFC Fylde hero scoring both goals in the victory at Bradford (Park Avenue).

Glen Walker got the winner as Brackley Town beat Southport 1-0.

Gateshead held firm to win 3-2 at Kidderminster, Macauley Langstaff at the double at Aggborough.

In the National League South, Dartford’s 100 per cent record is gone.

But Jack Jebb pinched what could be a useful point at home to Tonbridge Angels.

In the game of the day, Sam Corne secured a 2-2 draw for Maidstone United at home to strong starters Concord Rangers in front of over 2,000.

Hampton & RB were too good at home for ten man Ebbsfleet United, it ended 3-0 at the Beveree.

Oxford City look like they could be strong again this season.

Leaders Take Focus But It's Too Early To Call Them That!  There’s a little look at the early leaders on BT Sport this weekend, not that their manager wants his team to be called that just yet.