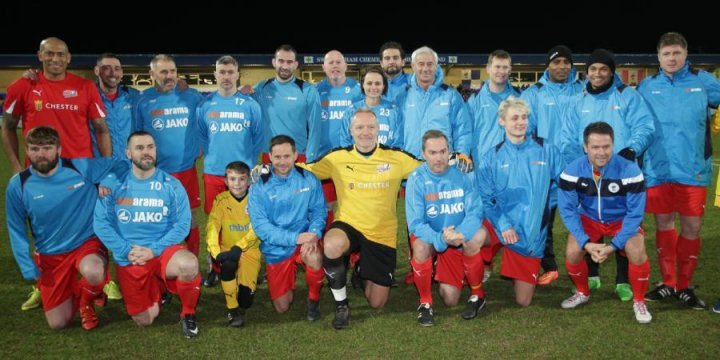 Chester’s fundraising total has hit another milestone, with the club confirming that the pot has now reached £90,000, writes Luke Turner.

A target of £150,000 has been set as the fans continue to come together to help bring money to the club and keep it afloat.

A large chunk of the total so far came when stars from the past and present helped raise £25,000 in an all-star football match.

A Chester Select XI beat Colin Murray’s All Stars 4-1, with Chester fan and former England striker Michael Owen getting on the scoresheet.

Prior to that, an incredible crowd of 1065 turned up at the Swansway Chester Stadium to watch their U19 side secure a narrow 1-0 victory against Gateshead in the National League U19 Alliance League Cup.

That occasion brought over £12,000 to the club, with more fundraisers planned for the near future.

On Friday 6th April, the best team in the history of Chester will re-unite for an evening of entertainment and nostalgia.

The squad that finished fifth in Division Three in the 1977-78 season will reminisce and celebrate their achievement – the Blues’ highest ever league finish under Alan Oakes.

Tickets for the event are priced at £15 and are on sale now from the club. The price includes a hot meal, with proceeds going to Chester FC’s fighting fund and the FPA fund.

 The Weather Bites Again As Matches Start To Fall Victim There was some frustrating news for clubs this morning as matches begun to fall.

McGregor Won't Change Mentality In Push For Play-Offs  Marc McGregor says his side have shown the way they play is getting them the results as they look to get into the play-off places.