Team Of The Weekend: The National League 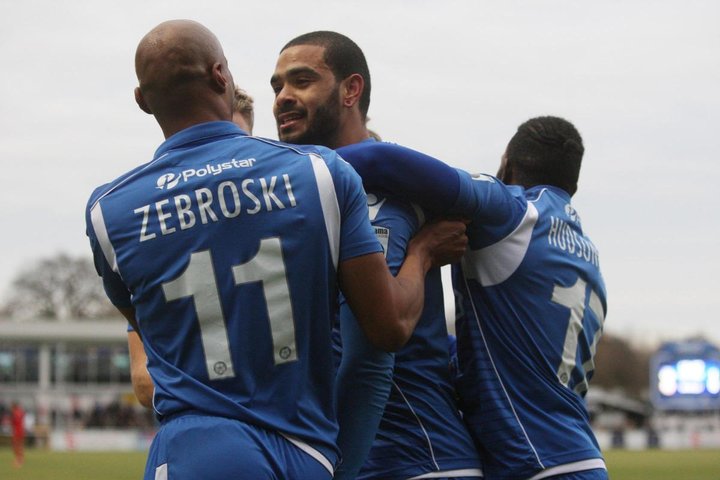 With 38 goals in the ten National League matches, you won’t be surprised to see our Team of the Weekend is a little top heavy!

The nets bulged on Saturday with some fantastic entertainment on offer - we have a high number of candidates for our select squad of 16 and we couldn’t fit them all in!

We’ve opted to go for an attacking 3-4-3 formation after a strong goalscoring weekend for a lot of our clubs.

As ever, we have whispered in the ears on managers, club officials and journalists around the grounds as we take advice on the players we can’t ignore.

But there’s always the chance we’ve miss out on a player who stole the show.

Let us know your views by taking it to twitter - you can find us at @TheNationalLge and remember, we’re also on instagram

Goalkeeper: Chris Dunn (Wrexham)
Tranmere Rovers manager Micky Mellon rates him - but was sick of the sight of him on Saturday. The Rovers boss said only Dunn’s display prevented a big three points.

Defender: Lazar Stojsavljevic (Woking)
A clean sheet against the league’s top scorers, a winning goal and spending nearly half an hour stricken on the pitch at full-time before ending up in hospital. Without doubt our captain!

Defender: Josh Gowling (Torquay United)
Few people gave the bottom side hope at leaders Macclesfield but the centre-back kept them in the game and gave the Gulls something to cling to.

Defender: Kristian Green (Solihull Moors)
Impressive as Moors’ magnificent run kept going at Dagenham. Played his part at both end of the pitch.

Midfielder: Harry Pritchard (Maidenhead United)
Really settling in to the National League now and two goals against struggling Chester took his tally to eight already. What a season!

Midfielder: Josh Rees (Bromley)
Talking of free scoring midfield players, Josh Rees just cannot stop. He now has 11 from midfield and two against FC Halifax sees him walk into the side.

Midfielder: Mitch Brundle (Dover Athletic)
If you haven’t seen his goal against Guiseley yet, it’s worth a click! Taking range, he whallops it into the top corner of the net. Class.

Midfielder: Adam McDonnell (Aldershot)
His second Shots debut was impressive. Back with a bang, the 3-2 win at Leyton Orient could prove to be so crucial come the end of April.

Striker: Adi Yussuf (Solihull Moors)
The striker swapped one relegation struggler for another - and how import his signing could be. Two goals on debut at Dagenham will have Barrow fans on edge.

Striker: Angelo Balanta (Boreham Wood)
Another wonder-goal you must watch, but Balanta wasn’t just outstanding in front of goal. He was fantastic for the Wood in their 3-0 win at Ebbsfleet.

Striker: Chris Zebroski (Eastleigh)
He’s had an supreme January, and his hat-trick against Hartlepool ended a great month in the best way possible for the Spitfires’ star.

Greaves: Points On The Board Is What Matters  FC United player-manager Tom Greaves says his side weren't at their best but getting the win over Curzon Ashton is what he wanted.