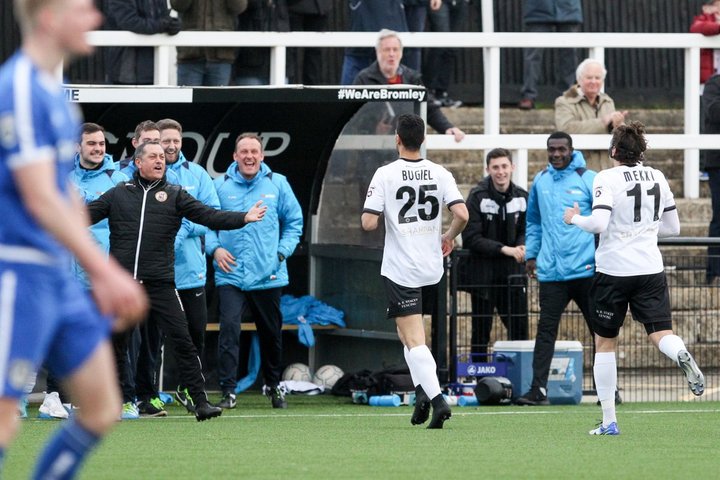 Bromley boss Neil Smith says a goal he set at the start of the season was to better the 60 points they gained last time around, while also making the FA Trophy semi-finals.

They are due to face Spennymoor Town tomorrow in the FA Trophy quarter-final replay, as they look to move to within two games from Wembley, writes Tom Feaheny.

"The group are looking forward to it, we know what is at stake, we have worked really hard already to get to this stage, so we obviously now want to go all the way."

With 55 points already secured, that certainly looks achievable for a side who are five points off the play-off places with two games in hand.

They also showed a strong mentality to defeat Guiseley after going a goal up, with moments to go they were pulled back to 1-1 but still won thanks to a late Omar Bugiel strike.

"We haven't played for a while due to the weather, so now we have got a game out the way we want to go again," Smith told the club's website.

"If it was down to me, we would be playing flowing football all the time, we couldn't against Guiseley, as they man marked and made it tough, but it was another win, that is what mattered."

Two players came off the bench at the weekend, to get them the win, Smith says those players are key if they are to get into the play-off places.

"Omar has scored right at the end, he went up last season, Josh Rees scored as well, he is a good player, this depth is key."

Dover Striker Loaned To Bucks Until Season`s End  AFC Telford United have signed striker Kane Richards on loan from National League side Dover Athletic until the end of the season.