My Teammates With Hampton's Max Kretzschmar 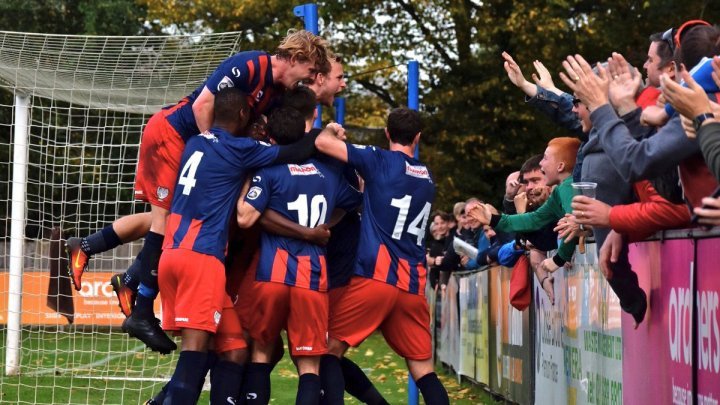 We've been getting to know the Hampton & Richmond Borough squad with Max Kretzschmar having his say on his teammates!

Kretzschmar gave his answers to these questions, writes Tom Feaheny.

Michael Kamara is the DJ. It’s mostly Hip Hop and R&B although I try to get the odd song I like in the playlist from time to time. I think he got the gig pretty early on in the season just before we went on out long winning streak, so it became superstition for him to continue! He’s doing a good job.

Who’s the first to training?

There’s a number of early birds, Michael Kamara is always in the changing room when I arrive and I’m pretty early most days. Christian Jolley and Brendan Kieran at normally in early doing extra gym work, so I’d say them three.

Who’s the last to training?

There’s a few who get the train in so they are the prime suspects. Jack Cook cuts it fine sometimes.

Charlie Wassmer, he’s an absolute beast on the pitch so needs the sufficient calories for it!

Josh Casey without a doubt, ‘Son of Dowse’, he must have the gaffer’s number on speed dial.

That’s a tough one. The general standard is pretty acceptable, I’m sitting on the fence for this one!

I think Shaun McAuley thinks it’s him because everything he wears is designer! I must say MK scrubs up quite well.

So I’ve got a bone to pick with this question! I got voted worst dressed for our Christmas night out which I’m a little sore about to the day! But this is far off the mark. Jack Cook often looks like a university student when he turns up to training and the club definitely need to invest in a pair of club tracksuit trousers that actually fit him!

Who’s the hard man in the team?

Charlie Wassmer no doubt. He’s a leader in the dressing room and loves full blooded tackles in both training and matches.

I’d have to say myself or Michael Kamara. We both love the game and like debating the tactical side of football even if it is most likely about what Pep Guardiola is doing at Manchester City!

Gray: Minstermen Reaction Has To Be Immediate  York City boss Martin Gray has urged his side to end the season in the best way possible as their play-off hopes took a blow after losing at Nuneaton Town.