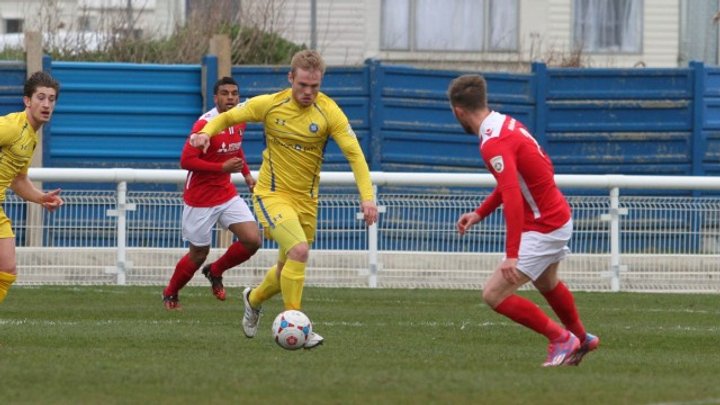 Cawley (pictured) has a wealth of experience and a good goalscoring record at this level.

He made 225 appearances for the Beachboys and netted 88 goals.

He signed for Concord back in September 2013 from Bishop`s Stortford.

He was previously with Potters Bar Town, Hoddesdon Town and Chesham United before joining the Blues in 2012.

His best goalscoring season came in 2015/16 when he notched 24 times for the Beachboys from forty-nine games.

Meanwhile, James Kaloczi has committed to the club for the coming season.

Kaloczi returned to the Tudors in the summer of 2016 after previously playing for the club`s under-18 side four seasons previous.

Having turned out briefly for Potters Bar Town, Kaloczi joined St Albans City and played a number of games for the Tudors` neighbours in their Southern League play-off winning squad and then again as a midfielder in the Saints' first season in the National League South, scoring with several long distance strikes.

A move to Dunstable Town allowed Kaloczi to play at centre-back where he excelled, was made captain and almost helped them into the play-offs, before finishing last season back at Clarence Park, playing a big part in The Saints relegation-avoiding run-in.

 Maidenhead Sell Talented Winger Barratt To Southend Winger Sam Barratt has become the latest export from the Vanarama National League into the EFL by joining SkyBet League One side Southend United from Maidenhead United for an undisclosed fee.

Joint-Managers Named For Guiseley As Big Changes Are Made  Russ O’Neill and Marcus Bignot are the new joint managers of Vanarama National League North side Guiseley.