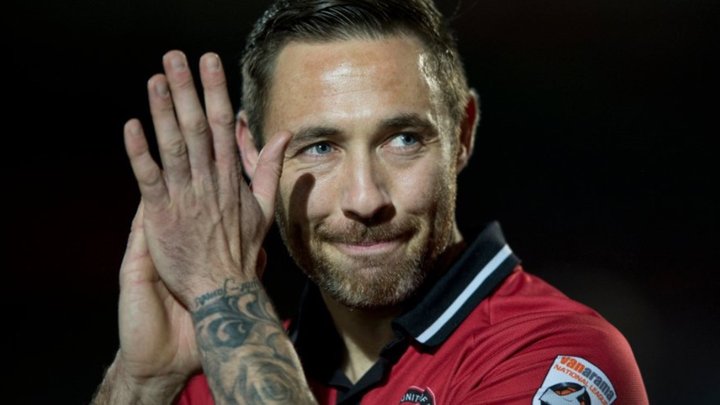 FC United of Manchester have announced that Tom Greaves has been appointed the club`s new player-manager after a successful spell in caretaker charge.

Joining Greaves will be Jack Doyle as his assistant-manager and Tom Conroy as first-team coach.

Thirty-two-year-old Greaves took over as caretaker/player/manager on 25th October 2017 following the departure of Karl Marginson - FC United’s one and only manager since the club was formed in 2005.

Having been given the opportunity to look after first-team affairs over the last month, Greaves and his assistants made no secret of their desire to take on the role on a permanent basis and are all relishing the challenge ahead.

Greaves told the club`s official website: "The idea of going into management, once my playing career was over, is something I’ve had in my mind for quite a while.

"This has come much sooner than I expected, but with Tom and Jack and all the backroom staff, I’m lucky to have a fantastic team alongside me. I’ve enjoyed the experience so far, and it’s definitely given me a taste for more.

"My approach to football is pretty simple. I want to see good, attacking football - I know how important that is to the supporters at the club. Above all, I want to see hard work out there, playing for the badge. In my eyes there no excuse for any player to not got out there and give it their all. The fans will back the players to the hilt, so long as they knew they were out there giving 110%.

"I’m under no illusion of the difficult task ahead. We are in a relegation battle, and we’re in for a real fight over the coming months. The division is tight enough that going on a good run can really catapult us up the league, but I’m conscious we’ve got a tough December that could send us the other way. But I’m confident we’ll get out of the situation we’re in.

"The attitude of the lads in the dressing room has been second to none. I’ve been left a squad of really talented players. What stands out to me is how dedicated they all are. We’re taking one game at a time at the moment, and that’s meant we’ve changed things up with tactics from game to game. That the lads have all been willing to adapt to the changes, without complaints, is a testament to their attitude."

Following the departure of Karl Marginson, FC United have been inundated with applications for the vacant role, although FC’s CEO Damian Chadwick and the FC United Board vowed to take their time over this important appointment.

However, following a two-week period of interviews, the decision was made to appoint Greaves as the next FC United manager.

FC United CEO Damian Chadwick said: "We’ve been really impressed with Tommy over the past four weeks since he took temporary charge. Naturally there were concerns over his football managerial experience having never managed before, but of what we have seen so far, of what Tommy conveyed in his interviews and also knowing the quality of Jack Doyle and Tom Conroy, we have no doubts that we have made the right decision.

"What struck me the most though was the respect and trust that every player had for Tommy, Jack and Tom. From their very first training session the players have been right behind them. We’ve got a talented young squad more than capable of keeping us in this league, but I’ll be supporting Tommy as much as I can should we need to bring in new players to strengthen the team further.

"Tommy is popular figure amongst the FC faithful, evident at Stockport a couple of weeks ago - despite being 4-1 down a long rendition of ’Tommy Greaves Red and White Army’ rang out from the FC United support. I know every single one of them will get behind him and the lads as we approach a crucial point in the season with some tough games ahead".

 Quinton Is Doing It All For His Boy Bobby! Braintree Town manager Bradley Quinton really should have nothing on his mind bar tonight's massive second vs third National League South match with Truro City.

Fylde's FA Cup Fever Hits New Heights  AFC Fylde have sold over 2500 tickets for their massive FA Cup second round clash against the 2013 winners Wigan Athletic, of League One.