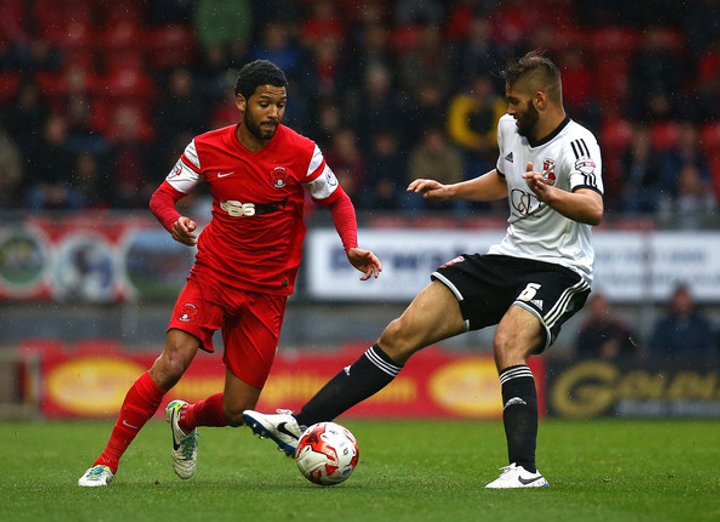 Leyton Orient have announced that goalkeeper Dean Brill and midfielder Jobi McAnuff have agreed extended contracts at the club.

Both player’s deals were due to expire at the end of the season but after talks with the club, Brill has agreed a two-year contract extension, while McAnuff has signed a one-year deal to see him through until the end of the 2018/19 season.

Brill joined the O`s in the summer as goalkeeping coach after leaving Colchester United before making his debut in the defeat to Solihull Moors in December and has kept five clean sheets in fourteen games.

McAnuff (pictured) re-joined the club for a second time in July and has been instrumental for the O’s this term, making twenty-eight appearances and scoring 3 goals.

Head coach Justin Edinburgh told his club`s official website: “We’re delighted to tie down Dean and Jobi to extended contracts. Putting Dean in goal was one of my first decisions at the club and he has been excellent, making some key saves while providing a strong voice at the back.

“Jobi has been first-class since I arrived and has been captain on a number of occasions. He works incredibly hard on and off-the-field and is a model of professionalism. Both players are going to be key not only in the run-in of this season but across the next eighteen months.”

Brill spoke to leytonorient.con following the confirmation of his new deal: “I’m delighted. It’s all happened pretty quick to be honest. I obviously came in during the summer and I took to the club straight away. The people at the club are fantastic and the fans, and the club itself are surely going in the right direction so I’m delighted to have extended my stay.”

McAnuff expressed his delight at extending his contract, saying: “I’m really happy to get it all wrapped up. Once the Gaffer expressed an interest in me staying I was very keen on getting it done and pleased to finally sign it. Obviously the first couple of years were tough so the reception has been brilliant and I’m really enjoying it, which I think has come across in my performances”.

Long Loan At Hampton Extended By U`s  Defender Sam Long's loan from SkyBet League One side Oxford United to Hampton & Richmond Richmond has been extended by another month.