What Happened This Afternoon In The National League? 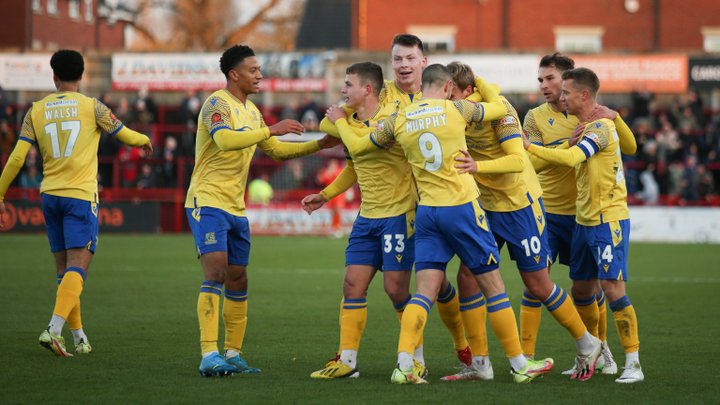 On a freezing cold day the National League’s strikers were typically red hot.

As the temperature dropped a winter warmer was provided - even if the division’s top three were all thawing off at home.

It was an afternoon to remember for Ollie Crankshaw as his hat-trick helped Dave Challinor’s Stockport County to three points at Wealdstone.

Kyle Wootton moved on to double figures as his winner won the BT Sport live game against Dagenham, it ended 2-1.

Billy Waters scored against his old club as Pete Wild’s won 3-2 at Plainmoor. Jordan Slew had another great afternoon, he scored twice,

Rhys Murphy was back to his goalscoring best as Southend United secured an important 2-1 win at Altrincham, pictured.

Adam Marriott is loving life at Barnet and he scored late on to earn the Bees a 2-1 victory at Woking.

The Dragons won 2-0 as goals from Reece Hall-Johnson and Paul Mullin did the job at the Racecourse.

Alfie Whittingham was the hero for Aldershot Town as they won the vital game down the bottom.

The Shots defeated King’s Lynn Town 1-0 - it was a third win in a row.

Dover Athletic came within 13 minutes of their first win but Yeovil Town’s Adi Yussuf had other ideas and rescued a point.

County & Daggers Look To Get Goals Flowing Again  The two sides who come under BT Sport’s microscope on Saturday are still wondering if they can transform their play-off push into an all-out title attack.