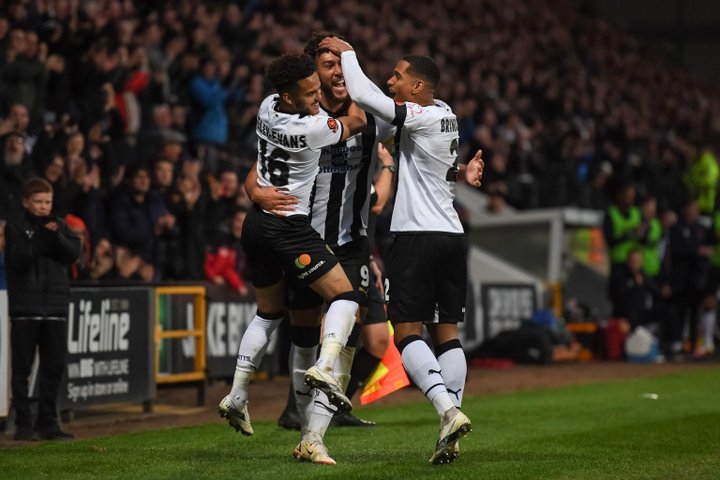 Records tumbled on a day when the goals flowed and new leaders hit top spot.

Chesterfield are the new National League table toppers after sweeping aside Weymouth.

Another fine day was enjoyed by Kabongo Tshimanga as he fired a hat-trick in the simple 4-0 victory over the ten-man Terras.

Grimsby Town had hoped to return to the summit but they were stunned 2-1 at Aldershot.

Bromley maintained their fantastic unbeaten run - and wrecked Dave Challinor's Stockport County homecoming. Scott Quigley had put the home side in front but they couldn't hold on.

The new manager saw substitute Liam Hogan bundle the ball into his own net late on as the Ravens snatched a 1-1 draw in the live BT Sport game.

The day’s highest scorers were Wrexham, who hit King’s Lynn Town for six. The Dragons had half a dozen different scorers as they eased to the points at the Walks.

It was a day for hat-trick scorers - Angelo Balanta was on fire as Dagenham & Redbridge eased past Maidenhead United.

Kyle Wootton and Kairo Mitchell made it an unhappy return for Neal Ardley.

Rhys Browne won’t have to buy a drink at Wealdstone ever again - he got the winner as the Stones beat big rivals Barnet 1-0.

Southend United’s problems continue - they went down 2-0 to Woking.

The game of the season so far in the National League North lived up to expectation.

Brackley Town pegged AFC Fylde back in the dying seconds, Tre Mitford made it 3-3 at Mill Farm after Nick Haughton thought he did enough to win it for the Coasters.

Chorley are lurking in third place as Connor Hall’s winner was enough to get beyond Leamington.

Steve Watson and York City parted company as the Minstermen drew 0-0 at Curzon Ashton. John Askey steps in until the end of the season.

Elsewhere, there were wins for Gloucester City, Hereford and Kettering Town - 4-0 victors over Blyth Spartans.

The big game in the National League South ended all square.

Leaders Dartford and Oxford City fired blanks but the table toppers are now winless in five.

It was the same scoreline as Havant & Waterlooville and Maidstone both found no way through.

The division’s game of the day was won by Ebbsfleet United, Alfie Egan got what turned out to be the winner in a 4-3 success at Hungerford Town. Fleet move into third place, just three points off top spot.

Peter Taylor is impressing at Welling United - the Wings 1-0 winners in a Kent derby against Tonbridge Angels thanks to Bradley Stevenson.

Freddie Grant’s goal was crucial as Slough Town came out on top against title-chasing Dorking Wanderers.

There were also big wins for Hemel Hempstead, Concord Rangers and Dulwich Hamlet as a full house of 3,334 watched them beat Bath City 3-0.

Click here for all of Saturday’s National League results.

National League Trust: Day of Recognition  Over the last 20 months football has played a vital part in helping communities cope with the stress of the pandemic. This weekend we celebrate the efforts all our projects, their staff and volunteers made since March 2020.