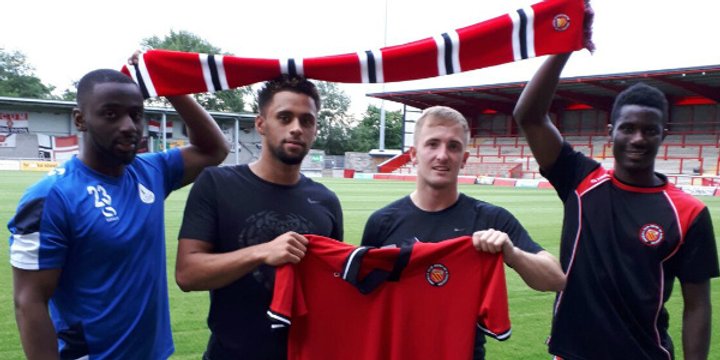 FC United of Manchester will have five new players in their squad as they travel to Dublin this weekend where they will take on Bohemians.

Manchester-born Evans, 24, began his career with Blackburn Rovers and played against FC United in a friendly in 2012.

Whilst at Blackburn he had loan spells with Accrington Stanley, Chesterfield and Macclesfield.

In 2014/15, he joined Southport and the following season he played for Stockport County and later that season joined Chorley on loan.

St Juste, 31, is an experienced left winger who played for Darlington in the Football League in 2004/05 before signing for Southampton on a short-term contract.

He failed to appear for the Saints and joined Garforth Town in November 2006.

Between 2011 and 2013 he played forty-seven times for FC Halifax Town, before joining Bradford Park Avenue.

In 2014/15, he played twenty-eight times for North Ferriby United and four times for AFC Fylde.

The following season he returned to Avenue and played twenty-seven times.

Last season he joined Boston United and featured in both league matches against FC United.

Chippendale, 25, is a winger who started his career in Bradford City’s youth system before being released at the age of 13 when he joined Huddersfield Town.

He was named Huddersfield’s academy player of the year for the 2009/10 season and graduated from the club’s academy in April 2010 after being offered a two-year professional contract.

On leaving Huddersfield he had spells with Accrington Stanley, Bury, Chester, AFC Fylde and Ashton United, before eventually settling at Stalybridge Celtic where he played seventy-eight times between 2014 and 2017.

Towards the end of last season he joined Bradford PA.

Logan, aged 22 from Manchester, progressed through the Rochdale youth system and was promoted to the first-team squad whilst still a youth team player.

He made his professional debut in October 2012 in League Two and in 2014 he had loan spells at Stalybridge, Southport and Wrexham.

In 2016/17, he joined Guiseley AFC and was on loan at FC Halifax Town as they won the play-offs.

Crowley, who played sixty-five times for Stalybridge Celtic between 2014 and 2017, came through the Everton academy before transferring to Watford’s youth system.

He joined Bacup and Rossendale Borough for a while, before joining Stalybridge Celtic in 2014, where he would make 65 appearances between 2014 and 2016. Crowley played against FC for Stalybridge in September 2015.

Thompson Delighted After Joining The Lions  Striker Reece Thompson says the ambitions of the club made it an easy decision to join Guiseley AFC.