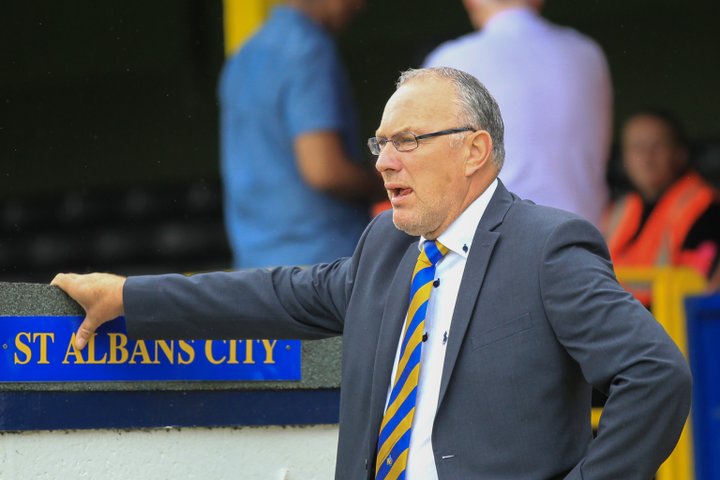 He spent eight happy years at the helm across two spells, but Boreham Wood can expect no welcoming gifts from a determined former favourite Ian Allinson this weekend.

St Albans City fall into focus on Saturday lunchtime, their local derby will be streamed live across the BBC's social media platforms.

It has, of course, an intriguing subplot to it all. Allinson, the former Arsenal winger, took Boreham Wood to where they are today as the Vanarama National League side look to see off their South opponents.

The 4QR game could be watched in front of a Clarence Park of around 2,000 as the Saints look for a crowd-pleasing scalp.

"Obviously this game means a lot to me personally,ÃƒÆ’Ã‚Â¢ÃƒÂ¢Ã¢â‚¬Å¡Ã‚Â¬Ãƒâ€šÃ‚Â said City manager. "It's where I spent a lot of years and I still have some really good friends at the club.

"I still get on very well with the chairman, Danny (Hunter) but he'll know me - on the day there really is no friends when it comes to football!

Allinson respects the fact that his team are thanking their lucky stars they won't have their feet up watching another club online instead of being showcased worldwide.

"It's nice to actually go into a game when there's no pressure on us, because most of the time that isn't the case in the league," the 60-year-old explained.

"We've had Cambridge City and Bridport at home and they turned up and both gave us a real scare so hopefully we can do the same as the lower ranked opposition on Saturday.

"We're actually counting our blessing to see be in the FA Cup. Against Cambridge City we could easily have lost in the last ten minutes but we held on and got a replay. We weren't great that day and know if we are anywhere near as bad as that then Boreham Wood will not let us off the hook."

 Old Aldershot Favourites Return In Opposing Dugout Gary Waddock's Aldershot Town will be up against two familiar faces in the opposing dugout when Torquay United visit in the FA Cup this weekend.