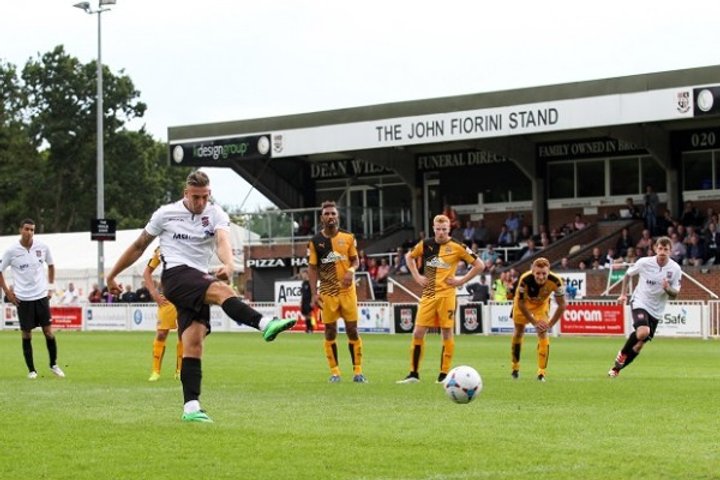 Wall was a free agent after having his contract terminated by National League side Bromley after a long injury lay-off and had been training with Hungerford over recent weeks.

Boardman and Herring felt that is attitude and ability in training was excellent and moved quickly to sign him.

He worked his way into the club's first-team at the age of 18.

Wall's progress through Thatcham's youth team was noticed by nearby National League South side Maidenhead United, who signed him in the summer of 2009.

In his first season at the club, Wall was primarily used as an impact substitute, and scored 10 goals in forty-one appearances in all competitions during the 2009/10 season, with 7 of these goals coming from appearances off the bench.

Wall played fewer games in the 2010/11 season, scoring only 3 league goals, but his performances led to interest from Football League clubs and in July 2011, he went on trial with Notts County, though a proposed transfer fell through despite a fee having been agreed between the two clubs.

He subsequently signed a new contract with Maidenhead and went on to play in thirty-five matches during the 2011/12 season, scoring 9 league goals.

Wall had his most successful season during the 2012/13 campaign, scoring at a rate of almost a goal every two games with 13 goals in twenty-seven league matches.

Wall signed for then-Conference (National League) side Luton Town on loan from Maidenhead in March 2013, with a view to a permanent transfer taking place later in the year.

He became the first signing of new Luton manager John Still, who had previously scouted and taken him on trial while managing Dagenham & Redbridge in League Two.

And, after impressing in his loan spell, he signed a permanent two-year contract with Luton a week later.

Wall initially struggled to adapt to full-time football, picking up a succession of injuries that kept him from breaking into the first-team, although he did take part in Luton's FA Trophy games.

With his game time limited due to the goalscoring form of Paul Benson and Andre Gray, Luton loaned Wall to then-league rivals Dartford for a month in January 2014.

His presence had an immediate impact as Dartford picked up ten points from a possible twelve with Wall in the team, leading to his loan being extended for another month.

Luton allowed Dartford to extend Wall's loan for a further month in mid-March, but opted to recall him only a few weeks later after he had scored 6 goals in eleven games.

Wall played a part in Luton's final four games of the 2013/14 season, scoring twice, as the club won the Conference title and promotion to the Football League with a club-record 101 points.

Wall's playing time was limited during the 2014/15 season, and he was sent on loan back to the Conference with Bristol Rovers in November 2014.

He returned to Luton just over a month later, but featured in only a handful of games and in May 2015 it was announced that his contract would not be renewed.

In June 2015, Wall signed for newly-promoted National League side Bromley and scored on his league debut for the Ravens.

Boardman spoke about the signing: "He is a big, strong no-nonsense kind of striker. I have spoken to some of my contacts and felt that Alex would be a great addition to our squad. He is big lad and a scorer of great goals and myself and Ian can't wait for him to get started".