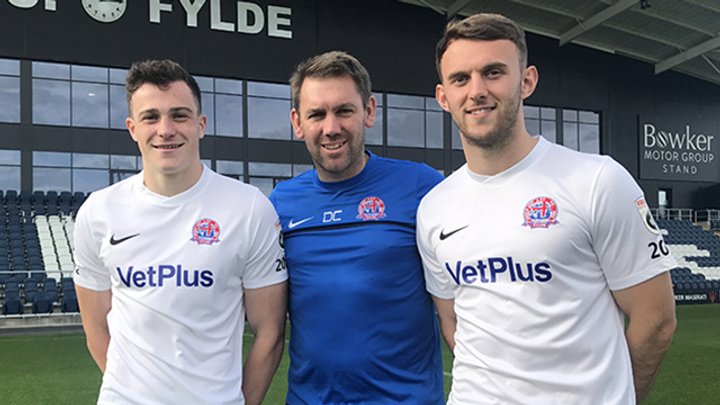 AFC Fylde have completed loan deals for Jamie Stott and George Edmundson from SkyBet League One side Oldham Athletic.

The youngsters have both signed one-month loan deals with the club, running until November 11th.

Stott, 19, signed professional terms with the Latics last season and played in the final four games as they avoided relegation, winning man of the match on his debut in a 1-0 victory over Bolton Wanderers.

The defender spent the majority of the 2016/17 season on loan at National League North side Curzon Ashton, featuring over forty times for the Nash as they reached the Second Round of the Emirates FA Cup.

Fellow centre-half Edmundson came through the ranks at Oldham and made his first-team breakthrough during the 2015/16 season.

He enjoyed a loan spell with National League North outfit Alfreton Town last term before being re-called towards the end of the campaign, going on to play several games for the Latics, including four this season.

Both will be available for selection for tomorrowÃ¢â‚¬â„¢s FA Cup clash against Wrexham.

 The Friday Feature: New Bath Boss Is Getting A Kick Out Of Managerial Pressure The pressures of football aren't for everyone. For managers especially, your destiny is in the hands of a group of people who are going to work just feet in front of you.

Trio Of New Lions Join Ahead Of FA Cup Tie  Guiseley AFC have announced a hat-trick of signings as manager Paul Cox continues to overhaul the squad.