What Happened Across The National League On Tuesday? 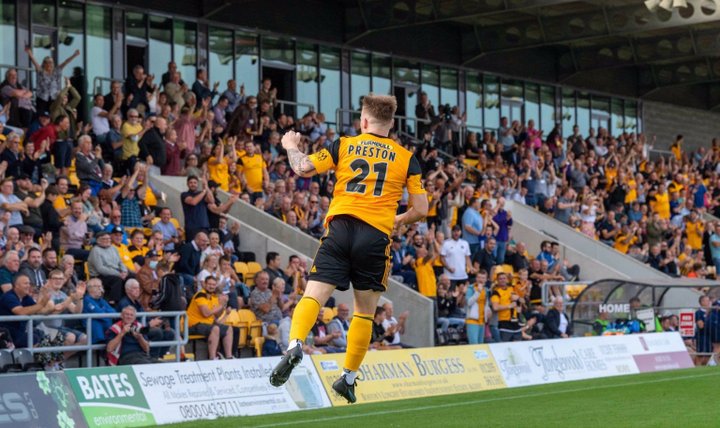 There was a game in each division tonight ahead of a huge FA Cup weekend.

In the Vanarama National League, Yeovil Town couldn’t quite end their winless run.

Altrincham are back into the top seven after coming from behind to take home a valuable point.

Yeovil boss Darren Sarll says his side let Alty, who played with outfield player Connor Hampson is goal for most of the match, “off the hook”.

Joe Quigley put the Glovers into the lead after 57 minutes.

But the Robins are made of stern stuff - they levelled things up eight minutes later, A-Jay Leitch-Smith securing a 1-1 draw.

Boston United are back in business in the National League North after their tough-to-take defeat at Gateshead on Saturday.

The Pilgrims, pictured, eased past AFC Telford United 4–1 as they put on a show for their fans to make it four wins in six.

They went ahead through Daniel Elliott and he doubled their lead after 20 minutes. It was game on when Jason Oswell gave the Bucks hope on the half hour.

But a late show confirmed the points - Joe Leesley and a Jake Wright penalty made it safe.

In the National League South it was heaven for Hungerford Town.

They put distance between themselves and the sides at the bottom with a 2-0 win over Braintree Town.

They added a second to move up to 13th when Jake Evans scored after 37 minutes.

National League's August/September Monthly Award Winners Revealed!  It’s been an electric start to the new National League season - and now’s the time to honour those who have set pulses racing across the country.