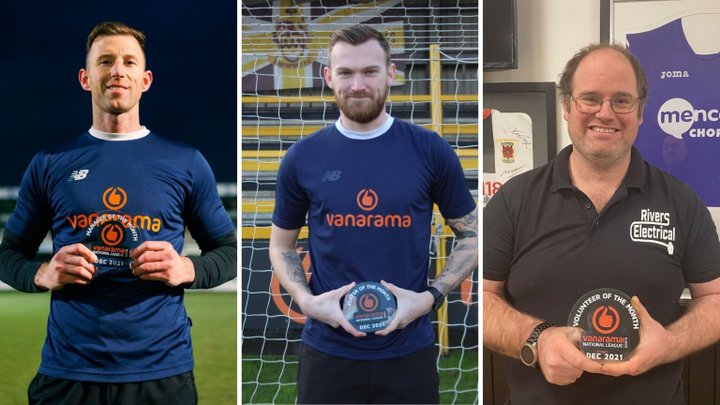 It’s time to place awards in hand in the Vanarama National League North - we’ve got some very worthy winners to tell you about.

The final month of 2021 was one to remember for Gateshead.

They began December being beamed into the nation’s living rooms with their FA Cup game against Charlton Athletic showcasing their improvement.

They may have fallen just short but going on to win their next four matches was quite a reaction.

It was one that put them into title contention and Mike Williamson not only oversaw victories over York City, Farsley Celtic, Darlington and then leaders Brackley Town.

But the veteran defender played in some of the month’s matches too!

Heed fans can’t wait to see what 2022 has in store for them.

It wasn’t so long ago that sorry Southport were sitting bottom of the table and worried fans feared the drop.

How quickly things can change, and Liam Watson never lost faith that his team could be involved in the promotion battle when it really mattered.

His team won four and drew one of their National League games last month and also beat Farsley Celtic in the FA Trophy.

Outstanding between the sticks, the 25-year-old is in the form of his life. He’s now got his hands on something else in the form of the National League North Player of the Month award!

We love the Vanarama Volunteer of the Month.

Rightly rewarding those who give up their precious free time for their club, those who make a difference get a little much-deserved acknowledgment.

Chorley and Craig Rivers continue to have an unrivalled love affair.

There’s not much he doesn’t do for his club - and the players are certainly rewarding him for his efforts at the moment!

Not only does the super fan act as matchday maintenance man and electrician, Craig is very active in the social and community work the Magpies do.

Youth is the way forward and he not only coaches the club’s up-and-coming kids but he sponsors the kits, too!

Being a volunteer often means last minute calls to action.

When Covid hit and catering staff were forced to isolate, he put his hand up and spent the game flipping burgers!